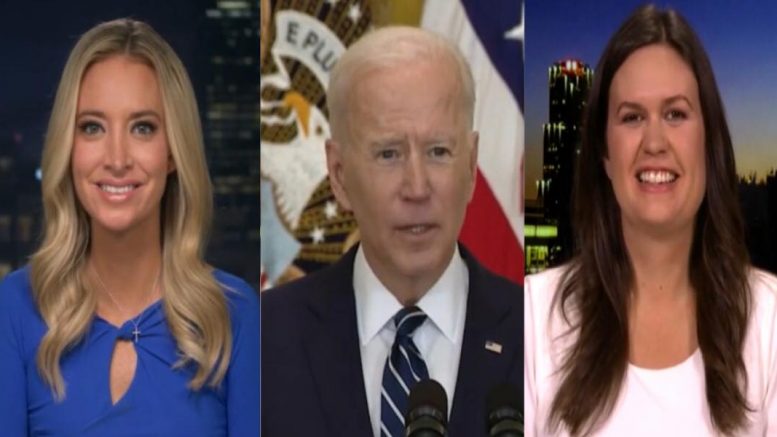 Biden made it through his ever press conference on Thursday, but not without the help of a prepared list and notes which surfaced after the briefing, as previously reported by The Freedom Times.

“It was hard to watch,” Sarah Sanders expressed. “Either Joe Biden doesn’t know what’s going on, or he’s deliberately misleading the American people.”

She clarified: “Whether it was on immigration, China, guns, he could not give a clear answer on anything. Take immigration for example. It is absolutely obvious that Trump’s border policy was working, and Biden’s border policy is a complete and total failure. It’s not complicated. When you encourage and even welcome people to come here illegally, they do. There’s not only a health crisis, a humanitarian crisis, but a national security crisis at the border.”

“Joe Biden is failing to even recognize it exists, much less be willing to deal with it. It’s certainly not going to be transparent. He fumbled all over the place talking about when he would allow the media in to see it, and it sounds like that’s gonna be next to never because he’s not letting them in until the problem goes away. And they’ve yet to even recognize or admit that there is a major crisis at our border,” Sanders explained.

She also pointed to Biden’s handling of China, calling it “total weakness”, adding, “They know it, we know it. They don’t fear him. They certainly don’t respect him, and it’s going to be very hard for him to deal with the big issues of the day when he can’t even get through a basic, friendly press conference with a handful of reporters at the White House that he’s been prepping for days to do.” Continued Below

Kayleigh McEnany said that she “certainly didn’t give” former President Donald Trump “a list of reporters to call out in order”.

“I would tell him who’s in the room and he himself, would make the decision who to call on. And sometimes I would even say, ‘Hey, you might not want to call on that person today. They’re really hot on a topic that’s going to be tough.’ [Trump] almost relished that even more, and he sometimes, oftentimes would call on that more hostile reporter first,” McEnany revealed.

“It’s incredible. One last point, Sean: I pulled up one of the press briefings today … former President Trump– just to get a taste of what it was like and to bring myself back. One of the very first questions he was asked in the briefing I pulled up was ‘Why did you lie to the American people, and how will they ever trust you?’ I could never envision the press corp asking President Biden any like that,” she expressed. Video Below

(Related Article: Leo Terrell: “When You Look at the Totality of the Situation, Something Is Wrong with Joe Biden”)