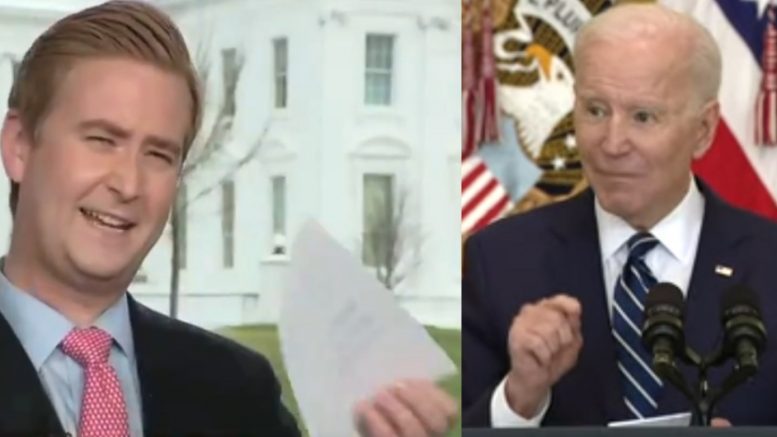 Joe Biden made it through his ever first formal press conference, but not without the help of a prepared list and notes, according to Fox News host Peter Doocy and images that surfaced after the briefing.

Doocy — who was snubbed by Biden from asking any of his ‘binder’ of questions — made mention of “the list” while appearing on Fox following the press conference.

Related Article: Leo Terrell: “When You Look at the Totality of the Situation, Something Is Wrong with Joe Biden”

“While he was up there, he was pretty much on his own,” Doocy said.

“Usually, at the last few of these… they had an aide off to the side with ‘the list’ of reporters to call on. Today, it was Biden with ‘the list’ and once they got through about and hour and twenty minutes, he was done.”

“I’m not sure if that was the end of the list. If we were on it, he did not make it down that far,” he concluded.

Fox News’ Peter Doocy has a binder full of questions he didn’t get to ask President Biden today
pic.twitter.com/YG7DAigsrm

Photos of “the list” that Doocy was referencing began circulating on social media soon after.

Joe Biden had a cheat sheet with the names and faces marked of which journalists to call on, and he knew EXACTLY what questions would be asked of him.

That was not a press conference—that was a play put on by bad faith actors in a pseudo-democracy. pic.twitter.com/ee56Xcg63M