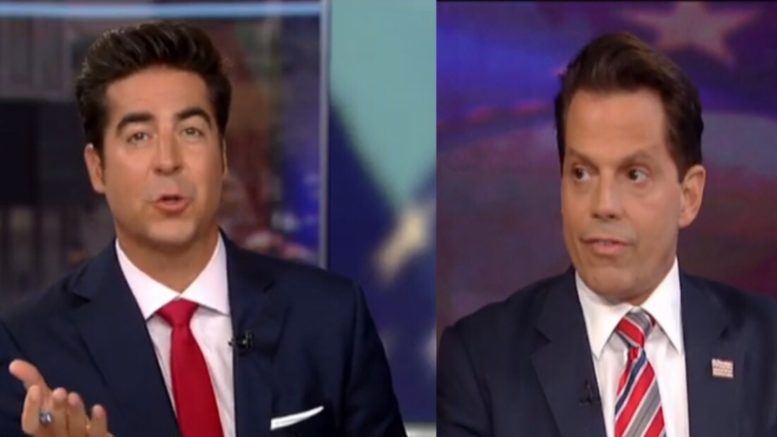 Saturday night on Fox News’ “Watters World”, host Jesse Watters invited Anthony Scaramucci on his show to discuss why he flipped and is bashing President Trump after once being a staunch supporter of the Commander in Chief.

Scaramucci now claims Trump is not a suitable President, referring to him as “incompetent, in mental decline, melting down, and said the ‘guy is losing it.'”

“This guy is no longer suitable to be President. He’s acting completely nuts and he’s very unstable,” Scaramucci told Watters.

“Let’s go over the last 2 or 3 weeks: he’s attacked the FBI unmercifully since he started, he’s going after Jerome Powe and the Federal Reserve. He said, ‘who’s the worst enemy of the United States to people, President Xi or Jerome Powe?’ And the list goes on and on,” he continued.

Watters explained to Scaramucci that President Trump has not changed. “This isn’t new behavior. He’s always been a little chaotic, and he’s always punched back hard,” Watters said.

Scaramucci said Watters is going to defend the President, but Watters shot back and said that “I’m not defending him, I’m worried about you!” (Continued Below)

Watters then proceeded to show clips of Scaramucci praising President Trump and it led to the “Mooch” getting very defensive.

“Yeah, I praised the President. I was one of those guys that praised the President, went to war for him, gave him money, gave him time, family time and energy, and he turned on me. I was on the Bill Maher show… the full-blown racist tropes against the Congresswomen– sorry I can’t defend that. The very next day, he attacked me, then he went after my wife. He’s a fascist,” Scaramucci said.

Watters shot back again and declared that President Trump is not a fascist. “He’s not a fascist and you know better than that,” he said. (Continued Below)

“I think you’re being used by the media. I think that you now have changed because the President has always been like that,” Watters expressed. “I’m just trying to get to the bottom of your change. Was it one thing or two things? I’m just trying to figure out what happened with you.” [Emphasized]

“You care what the President thinks obviously,” Watters fired back. (Video Below)

“I care what the President thinks? No, I think the President has gone crazy and he’s getting crazier and crazier. I think he’s in full-blown mental decline,” the Mooch claimed.

Before ending the segment, Watters announced that Scaramucci has height envy and that they had to hike up his chair for him: “He didn’t like how short it was. If he stood up, we’ll see how tall we are,” Watters joked.