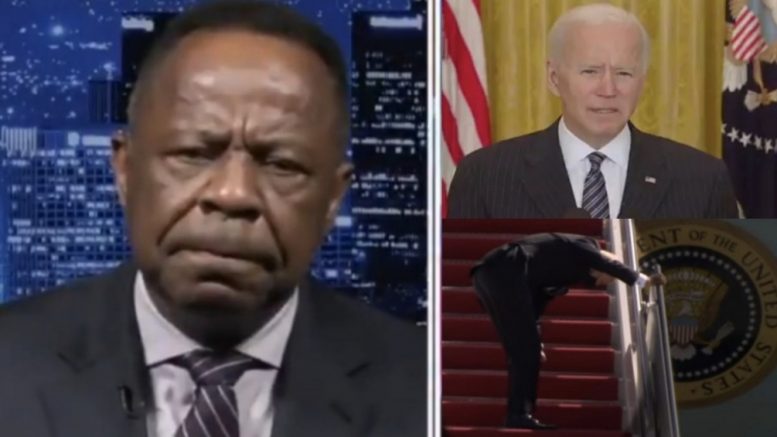 This past week, not only did Biden suffer an unfortunate stumbling incident while boarding Air Force One, but he also mistakenly referred to Vice President Kamala Harris as ‘President Harris’.

“When you look at the totality of the situation, something is wrong with Joe Biden. I didn’t vote for the man but he’s our president. But right now he’s an embarrassment,” Mr. Terrell told Judge Jeanine Pirro on her Saturday night program. Leo was weighing in on the Biden’s current status as commander-in-chief. “He’s an embarrassment, not only to this nation but world-wide.”

He continued, “When a foreign nation like Putin is challenging our president, that tells me something’s wrong. And for him to keep calling Kamala Harris ‘President Harris’, that is a problem…Plus what we saw with him the other day falling down, something is wrong with Joe Biden. I want to hear from his White House medical doctor.”

“And finally, the worse thing that could ever happen in this country is Kamala ‘Socialist’ Harris become president. That is a horrible decision,” Leo declared.

We've all seen Biden falling up the steps of Air Force One on Friday. But what we can't help remember is the absolute hysteria from the liberal media and even Biden himself when Trump walked gingerly down this ramp at West Point. Here to react is @TomiLahren and @TheLeoTerrell. pic.twitter.com/8S0YepQQ5n