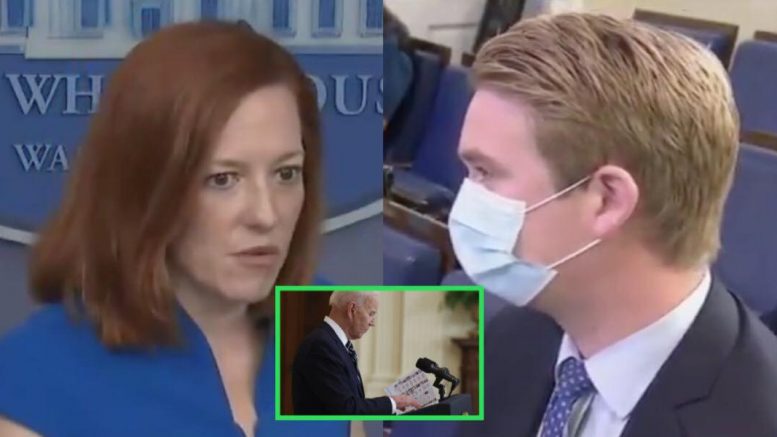 Fox News White House correspondent Peter Doocy was not called upon to ask a question during Joe Biden’s first formal press conference on Thursday. It was later revealed that Biden had help during his conference with a prepared list of reporters to call on and notes, as previously reported by The Freedom Times.

“Anytime where the president has an event where he’s given a list of reporters to call on, FOX is the only member of the 5 network TV pool that has never been on the list in front of the president. And I’m just curious, is that an official administration policy,” Peter Doocy pressed Jen Psaki.

The White House press secretary deflected, asking Doocy, “We’re here having a conversation, aren’t we? And do I take questions from you every time you come to the briefing room? Has the president taken questions from you since you came in– since he came into office? Yes or No?”

“Unfortunately, only when I have shouted after he goes through his whole list,” Doocy informed Psaki. “And the president has been very generous with his time with FOX. I’m just curious about this list that he’s given– only member of the 5 network pool never on it dating back to when he resumed in person events in Wilmington during the height of the campaign.”

Psaki again diverted without explaining the “list”, and instead she told Doocy, “Well I would say that I’m always happy to have this conversation with you, even about your awesome socks you’re having on today– you’re wearing today, and have a conversation with you even when we disagree. The presidents taken your questions, and I’m looking forward to doing Fox News Sunday this Sunday for the third time in the last few months.” Video Below

Doocy also read comments from Biden in 2005 over his position of Democrats using the filibuster:

BOOM: Fox's Peter Doocy just read to Jen Psaki the 2005 comments from Joe Biden in support of the filibuster and then asked if that meant Biden was supporting "the legacy of the Jim Crow era." pic.twitter.com/VjHfoZMO4n

FLASHBACK: Joe Biden on the filibuster in 2005: "I pray God" Democrats never use the nuclear option. https://t.co/TRAdJJCSDC pic.twitter.com/OoLUeIQWzK

After @POTUS @JoeBiden denounced the rampant abuse of the filibuster last year, we did some digging. Republicans used it once. Democrats used it 327 times. @FoxNews

(Related: Doocy Irritates Biden After Informing Him That Someone Else Had A Bigger Crowd Size In Iowa)