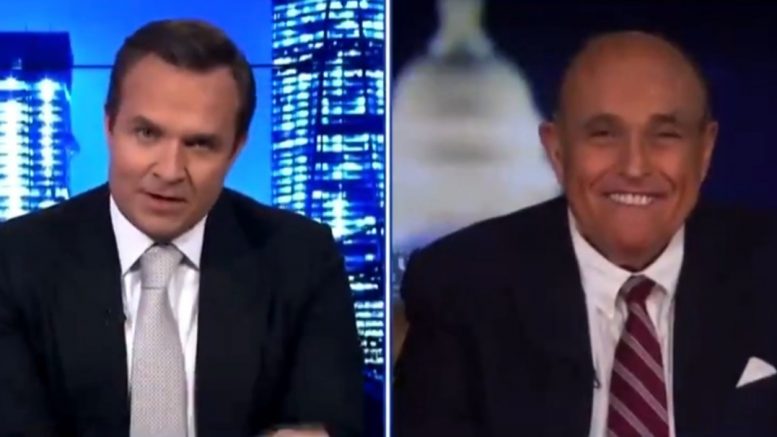 According to Mr. Giuliani, there are currently five pending court cases with two more on the verge of being filed, for a total of seven lawsuits to dispute the results of the election. And he suspects that at least one of those cases could soon be heard by to the U.S. Supreme after being struck down 5-2 by Pennsylvania’s lopsided Supreme Court.

“The numbers have gotten to the point where I can say if we win three of the five [lawsuits] — and there will eventually be seven — then the numbers change immediately. [Trump] goes above 270, and Biden goes below 270,” Giuliani told Newsmax in an interview on Wednesday.

“So, if you were to win Pennsylvania, Michigan and Wisconsin, that would be the end of the election,” Rudy pointed out as an example.

“Michigan has already indicated they’re not gonna certify,” he continued. “Wisconsin has a very strict procedure of their own. We’re quite confident that we’ll be able to knock out about 60,000 ballots there that are illegal, and Wisconsin is only a 10,000 margin.”

Rudy went on to mention that their recent loss in the Pennsylvania Supreme Court is just part of the process to bring that lawsuit to the U.S. Supreme Court, where he expects to have a better shot at presenting the case.

.@RudyGiuliani says there will end up being 7 lawsuits total. If we win 3 of the 5 they’ve got right now we will win. We will definitely lose some but it will end up going to the Supreme Court. pic.twitter.com/0NHvdk9PpP

Rudy followed up by expressing his hope that the all judges and justices overseeing the cases presented by the Trump campaign have the intellectual honesty and faith of the U.S. Constitution.

We leave you with that clip.

.@RudyGiuliani says we’ve got to hope and pray that judges have the intellectual honesty and faithful to the constitution. pic.twitter.com/5VBoynjk3x