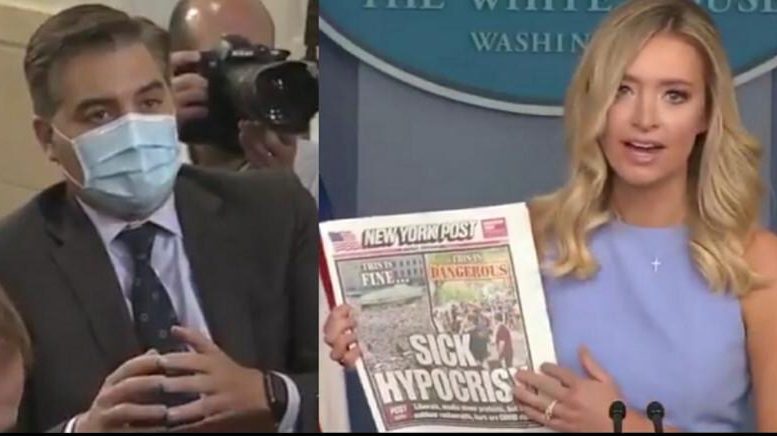 Wednesday during the White House press briefing, Press Secretary Kayleigh McEnany schooled CNN’s Jim Acosta after he criticized the Trump campaign for the upcoming rally, which is set to take place Saturday in Tulsa, Oklahoma.

The press secretary told Jim Acosta: “So the campaign has taken certain measures to make sure this is a safe rally– temperature checks, hand sanitizers, and masks, so we are taking precautions.”

Acosta then asked, “But you’re not requiring people to wear masks?”, to which McEnany told the CNN correspondent: “They will be given a mask. It’s up to them whether to make that decision. The CDC guidelines are recommend, but not required.”

“So aren’t you in essence bringing people to a rally where they won’t be abiding by those guidelines?” Acosta asked.

McEnany told Acosta that is a “personal choice to individuals as to what to do”.

“But if we want to talk about internal coherence, I believe that the media needs to work on internal coherence,” the press secretary recommended as she held up the front page of a New York Post headline, which displayed thousands of protesters, who had gathered in front of the Brooklyn Museum in New York City over the weekend, for a Black Trans Lives Matter rally and march.

“This wonderful New York Post story … good job to the New York Post– highlights the hypocrisy of the media, where this is okay,” McEnany said, showing the thousands of protesters in New York, then noted the other picture which was side by side. “This is not okay, Trump rallies,” she noted.

“It’s really remarkable and I think the American people have taken notice,” McEnany said, then proceeded to highlight NBC News, who praised the Brooklyn protest but warned of COVID-19 for President Trump’s upcoming Tulsa rally.

Kayleigh McEnany on Trump rallies: “It is our decision that the media should not be making decisions about their guidelines to us about social distancing based on political ideology or what they think is the worthiness or the cause.”

She held up the New York Post headline for the press to see again.

McEnany referenced the thousands of protesters who gathered in Brooklyn over the weekend:

Thousands gathered in front of the Brooklyn Museum in NYC for a Black Trans Lives Matter rally and march. https://t.co/QjYg7wmQH1 pic.twitter.com/pwrTY1E4Qn

NBC News’ headlines that the press secretary brought attention to:

Little over an hour apart. pic.twitter.com/K2a7fGRNDd