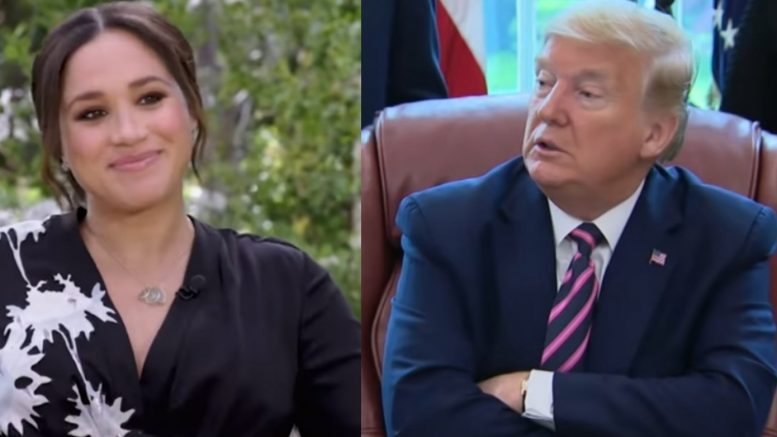 The Duchess of Sussex is purportedly networking among senior Democrats with a vision to build a campaign and fundraising teams for a shot at the U.S. Presidency, the Daily Mail reported on Saturday.

As per the Daily Mail’s article: “Meghan Markle will use the furore over her interview with Oprah to launch a political career which could take her all the way to the White House, if rumours circulating around Westminster last week turn out to be accurate.”

Asked what he thought about Markle’s alleged presidential aspirations, Trump said, “I hope that happens because if that happened I think I’d have an even stronger feeling toward running.”

Trump went on to express his distaste for Markle’s negative remarks about the royal family and Queen of England, who he met while serving as President.

“I’ve met with the Queen, and I think the Queen is a tremendous person. And I’m not a fan of Meghan,” he concluded. Video Below

As for his future in politics, Trump signaled that his sole focus is helping Republicans retake control of the House and Senate in 2022, and that he will wait until after the midterms to decide whether or not he will run for President in 2024.

President Trump says he'll make a decision about running again in 2024 after the midterms:

"Based on every poll, they want me to run again but we're gonna take a look and we'll see. First step's first, we have to take back the House." pic.twitter.com/ulX40enJzh