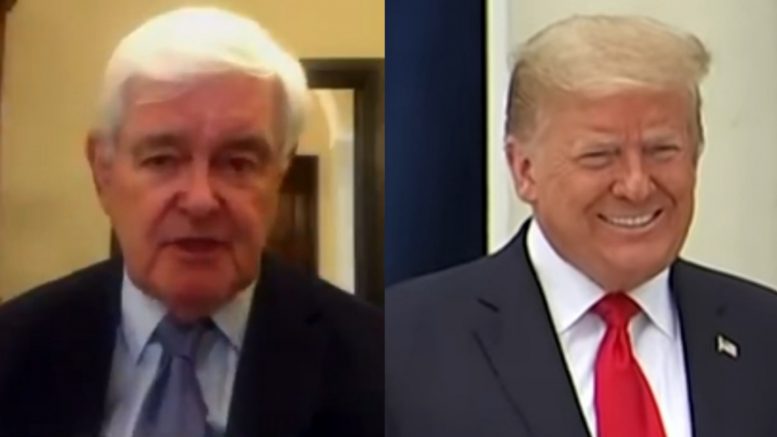 The assertion by Newt comes just days after he suggested that the Biden-Harris ticket is on the verge of a major collapse, similar to that of George McGovern’s campaign in 1972, when he lost to incumbent President Richard Nixon in a landslide.

As backup, Newt cited a poll that shows Trump tied with Biden in the traditionally left-leaning state of Minnesota.

Newt also pointed out that “Republicans came roaring back everywhere except Seattle” in Washington state and have done ‘dramatically better than they did in ’18.”

He also mentioned that in special elections “we’ve been doing very, very well.”

Related Article: Newt Gingrich: “This Will Be The High-Water Mark Before The Collapse Of The Biden-Harris Ticket”

Finally, Newt referred to a conversation he recently had with New York state assembly candidate, who is running in a county where Hillary won by 16 points in 2016, but Trump is now ahead.

Gingrich quoted the candidate as telling him, “People are watching Madison Avenue and 5th Avenue be trashed, and they’re watching gangs starting to come into their town and they’re saying, ‘I don’t want anymore of this.” Video Below

.@newtgingrich tells @JesseBWatters He predicts a @realDonaldTrump Victory dramatically larger than anyone expects. You can see it building back through the polls and special elections. The people is sick of the violence. pic.twitter.com/m3XyDad8WP

In ending, here is more commentary from Gingrich in his conversation with Jesse Watters on Saturday:

.@newtgingrich tells @JesseBWatters he was shocked that Biden or Harris couldn’t condemn antifa. Stuff like the Chicago mayor putting Police on her streets but good luck to the rest of the city really sinks in two a level of reality that @MSNBC Can’t cover it up. pic.twitter.com/TwzJXtEQvN