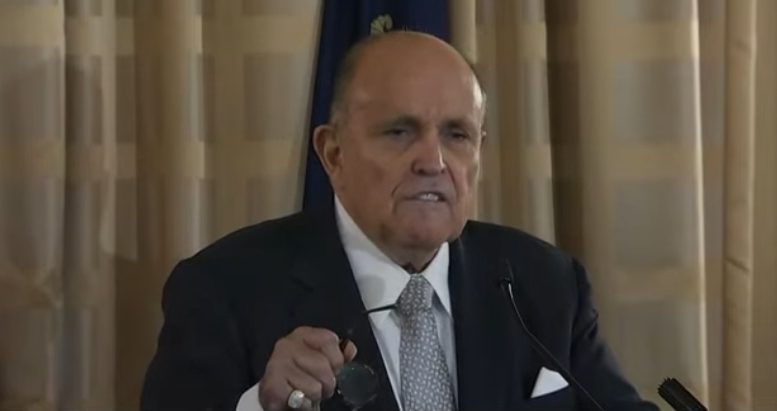 Rudy Giuliani issued a statement after learning that Dominion Voting Systems filed a $1.3 billion dollar defamation lawsuit against him on Monday morning.

The election technology company is accusing Giuliani for pushing a “Big Lie” about election fraud on his podcast and TV appearances, according to a report by WABC radio.

“Just as Giuliani and his allies intended, the Big Lie went viral on social media as people tweeted, retweeted, and raged that Dominion had stolen their votes. While some lies — little lies — flare up on social media and die with the next news cycle, the Big Lie was different,” Dominion’s legal team wrote in their lawsuit that was filed in a Washington, D.C. circuit court. “The harm to Dominion’s business and reputation is unprecedented and irreparable because of how fervently millions of people believe it.”

As reported by WABC:

“The lawsuit notes that while Giuliani spread falsehoods about Dominion being owned by Venezuelan communists and corrupting the election, he did not make those claims in lawsuits he pushed on behalf of Trump.”

“Dominion’s defamation lawsuit for $1.3B will allow me to investigate their history, finances, and practices fully and completely. The amount being asked for is, quite obviously, intended to frighten people of faint heart. It is another act of intimidation by the hate-filled left-wing to wipe out and censor the exercise of free speech, as well as the ability of lawyers to defend their clients vigorously. As such, we will investigate a countersuit against them for violating these Constitutional rights.”

Nice move, Dominion — now you have to give @RudyGiuliani and anyone else you sue complete access to the actual machines used on 11/3 AND they have to be unwiped — still containing the results from that day. It's called discovery. Not a smart move.

Biden: “You Won’t Have To Worry About My Tweets When I’m President”; Don Jr. Responds: “You Couldn’t Figure Out Twitter If You Wanted To”