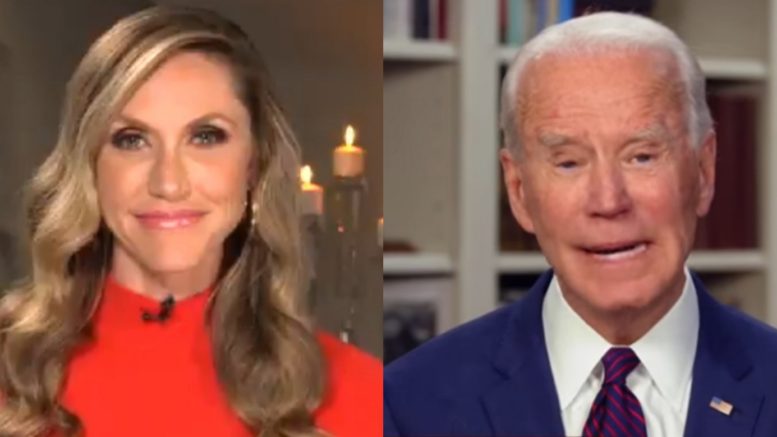 While appearing on Justice With Judge Jeanine, Lara Trump blasted presumptive Democratic nominee Joe Biden over his public statement to address to the sexual assault allegation made by his former staffer Tara Reade.

Related Article: Sen. Blackburn On Biden Sexual Assault Allegations: “It Would Be Important For The Vice President To Come Out & Tell The Truth”

In her response to Biden’s remarks, Lara Trump said, “Joe Biden obviously came out on MSNBC and tried to make a statement. All he kept saying is ‘I don’t remember’.”

“Well, we know he doesn’t remember where he is half the time, what position he’s running for, who’s his sister and his wife — but that is not an acceptable answer: ‘I don’t remember’,” she added.

“So all of these people who are holier than thou, who are preaching to us to always beoieve women, now all of a sudden they don’t believe Tara Reade. It’s actually kind of astounding to me,” Lara proclaimed. Video Below

.@LaraLeaTrump is here to react to the latest sexual assault allegation against presumptive democratic presidential nominee, Joe Biden and says that Biden stating “I don’t remember” is not an acceptable defense. pic.twitter.com/eV5SFuGQR0

In ending, here is a compilation of some Biden’s gaffes’s, some of which Lara Trump is referring to: