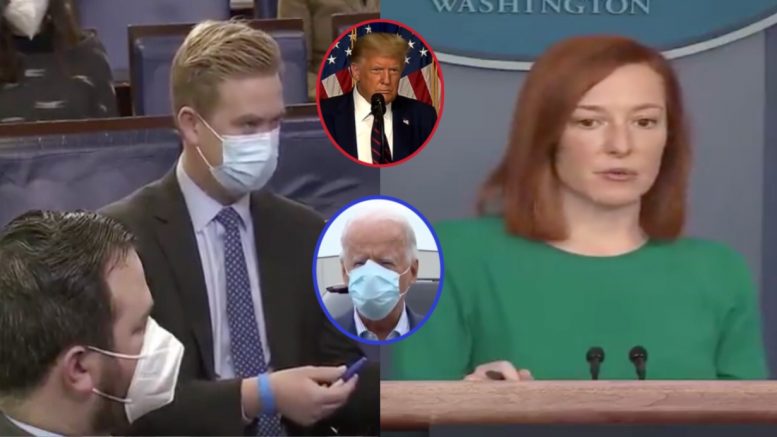 On January 31, 2020, former President Donald Trump issued an Executive Order blocking entry into the United States from anyone who had been in China within the previous 14 days as the Coronavirus pandemic entered the U.S.

At the time, then-candidate Joe Biden tweeted the next day after the Executive Order was issued, “We need to lead the way with science — not Donald Trump’s record of hysteria, xenophobia, and fear-mongering. He is the worst possible person to lead our country through a global health emergency.”

Joe Biden also told voters during an Iowa campaign stop on February 1, 2020, “This is no time for Donald Trump’s record of hysterical xenophobia and fear-mongering” after President Trump implemented his travel ban from China on January 31.

On March 18, Joe Biden yet again, tweeted in response to President Donald Trump– telling the former president to “Stop the xenophobic fear-mongering”. 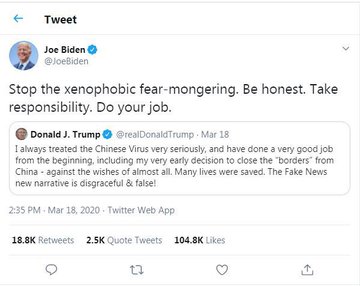 Before leaving office, President Donald Trump directed on January 18 those restrictions on Brazil and Europe be lifted effective Tuesday but Biden’s proclamation will rescind that decision. Continued Below

Meanwhile, Joe Biden will impose a ban on most non-U.S. citizens entering the country who have recently been in South Africa starting Saturday in a bid to contain the spread of a new variant of COVID-19. Biden on Monday is also reimposing an entry ban on nearly all non-U.S. travelers who have been in Brazil, the United Kingdom, Ireland and 26 countries in Europe that allow travel across open borders, Reuters reported.

“Now, President Biden is putting travel restrictions on people coming in from other countries. What word do we use to describe that?” Doocy wondered.

Psaki dodged Doocy’s question, saying it is “not a fair articulation”, then pivoted to claim that the “Muslim ban” is xenophobic, though the countries Trump had banned in January 2017, has slowed or altogether halted legal immigration from certain countries that the former administration deemed to be security threats. Continued Below

The ban, ultimately upheld by the Supreme Court, barred citizens of seven countries — Iran, Libya, Somalia, Syria, Yemen, Venezuela, and North Korea — from obtaining any kind of visas, largely preventing them from entering the U.S.

Trump expanded the ban last February to include additional restrictions on citizens of six more countries: Myanmar, Eritrea, Kyrgyzstan, Nigeria, Sudan, and Tanzania. While they could still visit the US, citizens of these countries were, for the most part, barred from settling in the US permanently, Vox reported.

.@PDoocy: "When…Trump was imposing travel restrictions in March, specifically on China…Biden called it 'xenophobic' and 'fear-mongering.'

Now, President Biden is putting travel restrictions on people coming in from other countries.

What word do we use to describe that?" pic.twitter.com/kgXD3vkB5k

Moreover, it also took Joe Biden two months to approve of President Trump’s travel restrictions on China that went into effect in the early stages of the coronavirus pandemic.

Psaki: ‘We Need to Reduce our Dependence on Foreign Oil, on Oil in General & Need to Look at Other Ways of Having Energy in our Country & Others’