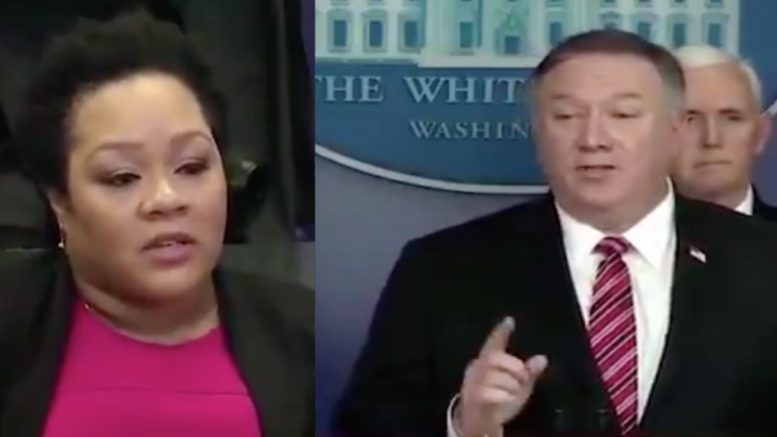 Members of the Coronavirus Task Force held a press briefing Friday to give an update on the COVID-19 pandemic. Secretary of State Mike Pompeo announced that the United States and Mexico have agreed to restrict non-essential travel across the U.S.-Mexico border, which goes into effect Friday at midnight.

Pompeo also took a few questions from reporters and slammed the media for reporting information that is “wildly inaccurately on multiple occasions”.

PBS’ White House correspondent, Yamiche Alcindor, asked the Secretary of State, “What message do you think it sends to other countries when you have the President of the United States lashing out at reporters?”

“I’ve had my frustrations with reporters too,” Mike Pompeo told Alcindor. “All I ask when I talk to the media is that you listen to what we say and report it accurately. And it’s frustrating. It’s frustrating when you see that doesn’t happen. It’s enormously frustrating.”

“I’ve seen many things about the State Department be reported wildly inaccurately on multiple occasions. And I have spoken to those reporters about it each and every time, and I will continue to do so,” he added, slamming the media. (Continued Below)

(Related: OAN Reporter Receives An Anonymous Note At WH After Trump Slams The Media’s Treatment Of Him)

Another reporter asked the Secretary of State: “Does it undermine you at all when the president stands up here and he attacks news outlets calling us untrustworthy?”

Pompeo denied the reporter’s attempt at trying to attack the president and then asked: “Does somebody else have a question?” (Video Below)

A reporter took issue with Trump’s sense of humor and asked Pompeo about it.

Question: "Was it appropriate for the president to call your department the 'Deep State Department?'"

Secretary of State Mike Pompeo: "I worked for the president for 3 years now, I know how much he values the people that work on my team."

Secretary of State Mike Pompeo also warned of fake news: “I want to talk about the disinformation… People all around the world should ensure that where they turn to for information is a reliable source.”

Secretary of State Mike Pompeo: "I want to talk about the disinformation… People all around the world should ensure that where they turn to for information is a reliable source." https://t.co/smMUWph6rb pic.twitter.com/vS1oPDplWx