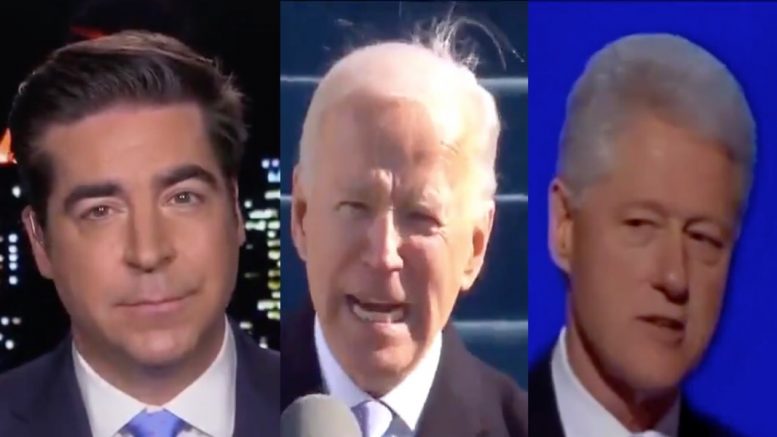 “Joe wasn’t even capable of writing his own inaugural address. We caught him plagiarizing Bill Clinton,” Watters said, before playing a clip of the former president’s remarks from August 27, 2008 during a Democratic Convention.

Jesse Watters played a clip of former President Bill Clinton who had said, “The world over have always been more impressed by the power of our example than by the example of our power”.

Watters then played a clip of Joe Biden speaking during Wednesday’s inauguration, in which he said in part, during his inaugural address, “We’ll lead not merely by the example of our power but by the power of our example”.

The Fox News host responded to Biden’s “plagiarism” saying, “It’s right beneath the surface. All you have to do is look”.

“Watters World will cover Joe Biden honestly. We’ll be watching him closely, and we’ll always tell you the truth about what we see”. Video Below

As reported by Business Insider:

Before Joe Biden was vice president during the Barack Obama administration, and before he bowed out of the 2008 presidential race, the longtime senator from Delaware unsuccessfully ran for the 1988 Democratic presidential nomination.

Incidents of plagiarism both on the campaign trail and during his time at the Syracuse University College of Law became some of the final issues that dogged Biden before he ultimately suspended his floundering campaign.

During an event at the Iowa State Fair, Biden mimicked entire portions of Kinnock’s speech from earlier in the year. At one moment, Biden repeated the line that he was the first “in a thousand generations” to graduate from college, gesturing to his wife in the exact same way Kinnock did, while also saying the same line about her education and lineage. Continued Below

Biden would later acknowledge that he in fact did have relatives who attended college, directly contrasting the Kinnock lines. As Dowd reported, Biden’s staffers were defensive about the allegations of blatant plagiarism. Nevertheless, Biden dropped out of the race by the end of the month.

According to another 1987 article in The Times, Biden acknowledged plagiarizing a law review journal for a paper during law school, and asked school administrators not to be expelled. But Biden also said he made a mistake in the citation process.

“My intent was not to deceive anyone,” Biden wrote at the time. ”For if it were, I would not have been so blatant.”

Why does Joe Biden plagiarize foreign politicians so much? pic.twitter.com/odRfmIDxIY