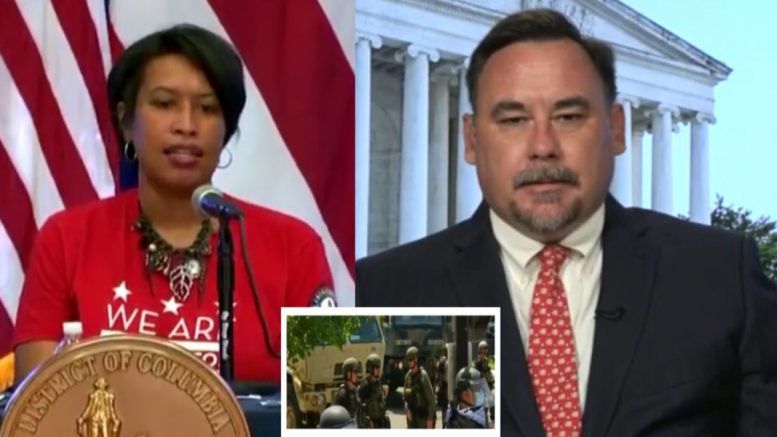 On Friday, the Utah National Guard confirmed that 200 service members were being kicked out of hotels in Washington, D.C. as Mayor Muriel Bowers battles with President Trump over the handling of the George Floyd protests in the city.

Bowser, who wants all non-D.C. troops out of the city, blamed the National Guard relocation on a budget issue and said the city will not pay for the accommodations — amid days of protests over racial injustice, some of which have been violent, Fox News reported.

“Last night, we were informed that our service members would be relocated from their hotel rooms,” the Utah National Guard said in a statement Friday.

“It has been heartbreaking for our Utah National Guard service members to witness the pain, suffering, and frustration in our communities across the nation,” the National Guard added. “The Utah National Guard has been supporting civil authorities with our top priority of protecting lives as well as preserving property and critical infrastructure in our nation’s capital.”

The Commander in Chief slammed Bowser over the issue on Friday on Twitter.

President Trump tweeted: “The incompetent Mayor of Washington, D.C., [Mayor Bowser], who’s [sic] budget is totally out of control and is constantly coming back to us for ‘handouts’, is now fighting with the National Guard, who saved her from great embarrassment over the last number of nights. If she doesn’t treat these men and women well, then we’ll bring in a different group of men and women!” Continued Below

Kevin Carroll, who is a partner at Wiggin and Dana, and who is an Army Veteran, told Leland Vittert on Fox News Saturday, that D.C. Mayor Muriel Bowers “does not have have the authority to order the National Guard units of other states to withdraw from the district”.

“So strictly speaking, she does not have the authority to order the National Guard units of other states to withdraw from the district,” the Army Veteran said. “With that said, using troops in the city over the objections of the mayor is fraught. You would hope that the mayor and the secretaries and the president are able to work it out and that the individual guardsmen themselves, don’t become a football here,” Carroll noted.

He told the Fox News host that the Insurrection Act has not been invoked, but the National Guard deployed in D.C. is currently there “to do what’s called Defense Support to Civil Authorities”, adding that the Guard has to “act at the direction of the civil authorities”.

Attorney General William Barr said Thursday that DOJ had deployed “all the major law enforcement components of the department on this mission,” including officers from the Federal Bureau of Investigation, the Bureau of Alcohol, Tobacco, Firearms and Explosives, the Drug Enforcement Administration, the Bureau of Prisons, and the US Marshal service. Video Below