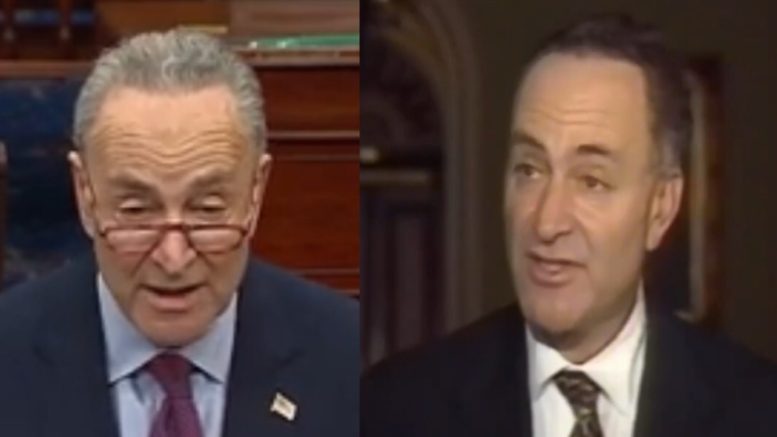 Senator Chuck Schumer (D-NY) has recently accused Senator Mitch McConnell (R-KY) as being “not an impartial juror” ahead of a Senate impeachment trial of President Donald Trump, as the Senate Majority Leader indicated there would be “total coordination” between the White House over the upcoming presidential impeachment trial.

Before the House voted to impeach President Trump, McConnell told Hannity: “…We’ll be working through this process, hopefully in a very short period of time in total coordination with the White House counsel’s office and the people representing the President in the well of the Senate.”

According to CNN, however, Schumer himself repeatedly expressed similar sentiments in the late 1990s when senators weighed the removal of President Bill Clinton. Schumer’s past comments are the latest example of how lawmakers on both sides of the aisle are having to confront their prior positions on impeachment that appear to conflict with their present-day statements.

In recent days, Schumer has slammed McConnell ahead of Trump’s trial, saying he was “utterly amazed” by McConnell describing himself as not impartial. “Let the American people hear it loud and clear, the Republican leader said, proudly, ‘I’m not an impartial juror. I’m not impartial about this at all.’ That is an astonishing admission of partisanship,” Schumer said in a floor speech.

But in several appearances on television in 1998 and 1999 reviewed by CNN’s KFile, Schumer noted that senators had previously formed opinions heading into the trial and that the Senate was “not like a jury box.” Schumer was elected to the Senate in 1998 after saying during his campaign that a vote for him would be a vote to not impeach Clinton. (Continued Below)

During his race for the Senate in 1998, Schumer campaigned against impeaching Clinton and attacked his Republican opponent, Sen. Al D’Amato, for not taking a position on the issue.
D’Amato had said it would be “inappropriate” to weigh in because senators “may be called upon to act as a jury.” The issue of impeachment was a frequent topic at a series of debates between the pair.

“I came to the conclusion that it didn’t rise to the high crimes and misdemeanors standard and that there shouldn’t be impeachment,” Schumer said in one debate with D’Amato. “Now the voters know of my view. I’ve made it public, unlike the senator. And I will, they can judge me on that.”

“To suggest that I should take your position now before the facts have ever been presented to us, absolutely would be improper. It would be wrong,” responded D’Amato. (Continued Below)

At the time of the vote to remove Clinton, Schumer announced in a Newsday op-ed that he would be voting to acquit. “My decision will not come as a surprise,” Schumer wrote. “I will be voting to acquit the president on both counts. I had to make my decision in September as a member of the Judiciary Committee in the House, and while I was in the middle of the campaign.”

Senator Chuck Schumer in 1999 also said: “I think that any fair process would be ‘consulting the White House’ because it’s the president who is the defendant. And due process would guarantee him for fairness, and would certainly guarantee him certain rights.” [Emphasis added].

Senator Chuck Schumer has blasted McConnell in recent days after he described himself as "not an impartial juror.” But, Schumer himself repeatedly expressed similar sentiments in the late 1990s when senators weighed the removal of President Bill Clinton. https://t.co/pfqaFEY5ix

(Related: Giuliani On Why Pelosi Has ‘Halted The Impeachment Sham’: A Trial Would ‘Expose The Corruption’ Of The Democrat Party)