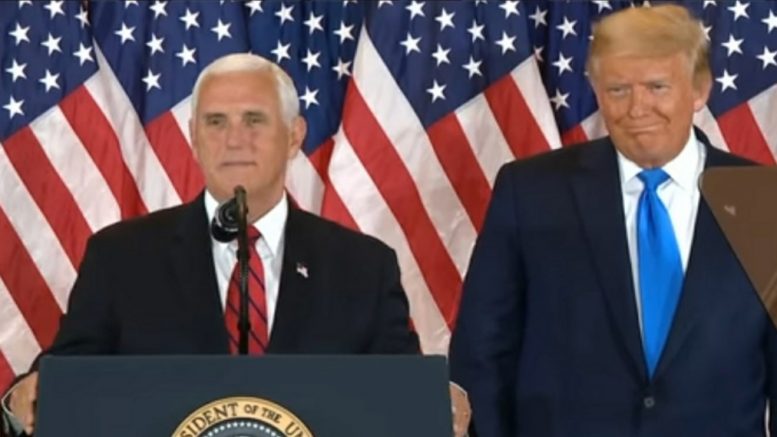 President Donald Trump issued a statement on Tuesday night rejecting reports from The New York Times and other news sources suggesting Vice President Mike Pence told Trump that he doesn’t think he will have the power to block certification of the 2020 electoral votes when Congress meets for a joint session on Wednesday.

The President called such reports “fake news” and clarified that he and Pence are “in total agreement” that he has the power to act. Trump further claimed that Vice President Pence “has several options under the U.S. Constitution.”

The Trump campaign posted the following statement from President Trump:

“The November 3rd election was corrupt in contested states, and in particular it was not in accordance with the Constitution in that they made large scale changes to election rules and regulations as dictated by local judges and politicians, not by state legislators. This means that it was illegal.

“Our Vice President has several options under the U.S. Constitution. He can decertify the results or send them back to the states for change and certification. He can also decertify the illegal and corrupt results and send them to the House of Representatives for the one vote for one state tabulation.“ Continued Below

Related Article: Vice President Mike Pence: “I Promise You, Come This Wednesday, We Will Have Our Day In Congress”

Later on Tuesday, Trump tweeted: “If Vice President @Mike_Pence comes through for us, we will win the Presidency. Many States want to decertify the mistake they made in certifying incorrect & even fraudulent numbers in a process NOT approved by their State Legislatures (which it must be). Mike can send it back!”

He then followed up on Wednesday morning by tweeting: “States want to correct their votes, which they now know were based on irregularities and fraud, plus corrupt process never received legislative approval. All Mike Pence has to do is send them back to the States, AND WE WIN. Do it Mike, this is a time for extreme courage!” See Below