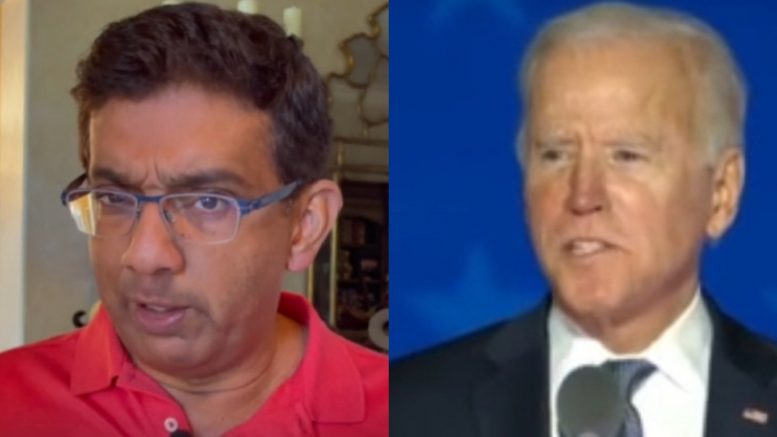 Dinesh D’Souza apparently woke up on New Year’s Day with an epiphany that backs the theory that Joe Biden was “in on the steal” of the 2020 election.

As part of his thoughts, Dinesh said that if Biden truly thinks that he won such a decisive victory over President Trump without the help of fraud, he would have already backed efforts for machine audits and signature verifications to be done…but he hasn’t.

But what was even more compelling about D’Souza’s analysis is when he rolled the tape of Biden’s election night speech where he seemed very confident that he was going to pull through with a victory over President Trump, despite being down by massive amounts of votes in various swing states.

“Remember on election night, Trump was leading in all of the key and decisive states, and leading by large numbers — 600,000 votes in Pennsylvania for example,” Dinesh said before rolling a clip of Biden’s speech.

“Doesn’t Joe Biden seem eerily cocky on election night?” D’Souza asked. “Doesn’t it seem like he kind of knows what’s up. Anyone who is trailing in all of these states is not going to say, ‘Hey, I got this figured out. We’re gonna win…we’re gonna win!’…No, you think he would be saying, ‘We still see a pathway for us’ and so on.”

“And so, Joe Biden had no basis for automatically assuming that all of those ballots were gonna fall his way or that the late counting would come out — automatically put him on top — yet he seems to know something that the rest of us didn’t. And that something was that there was a major heist underway,” Dinesh concluded. Video Below