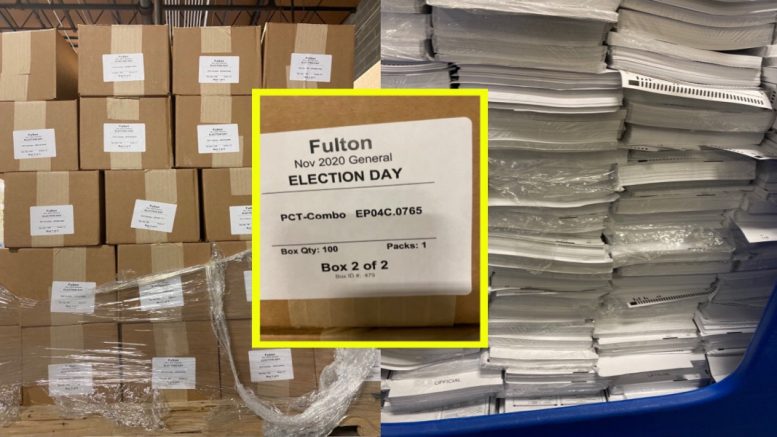 (**This article has been updated to provide the most accurate information. The Freedom Times added a correction to our report from Lead Stories, which is a fact checking website used by Facebook. A misleading story, which was circulating social media involving blank ballots in Georgia– is reportedly emergency paper ballots stored in a warehouse as back-ups in the event voting machines failed on election day, according to a representative of the Fulton County elections department and an official with the Georgia secretary of state’s office).

Former CEO of Overstock, Patrick Byrne, took to Twitter Friday, posting pictures of “pallets” of alleged “fake ballots” (counterfeit ballots), which were reportedly found in a Fulton County, Georgia warehouse according to Byrne, right after the Georgia Judiciary Subcommittee voted to inspect them.

A Georgia State Senate Judiciary Subcommittee on Wednesday, unanimously passed a motion to audit Fulton County’s absentee ballots using a method outlined by expert and patent owner in barcode and QR code technologies, Jovan Pulitzer. Pulitzer called on state officials in Georgia to allow an examination of all absentee ballots. He explained that he could audit more than 500,000 votes in Fulton County in a matter of hours by using his technique of identifying fraudulent paper ballots.

“COUNTERFEIT FULTON COUNTY GEORGIA BALLOTS. On a tip, our operative entered the Fulton County (Atlanta) Warehouse and took this series of photos: THESE ARE FAKE BALLOTS,” Patrick Byrne reported Friday.

Did a pro-Trump “operative” uncover thousands of counterfeit November 2020 Fulton County ballots stored in an Atlanta warehouse? No, that’s not true: Photos of boxes of ballots showed emergency paper ballots stored in the warehouse as back-ups in the event voting machines failed on election day. Election rules require each county to hold emergency ballots equal to at least 10% of the number of registered voters. These ballots are not fake and were not used. A county elections official offered to let the doubters inspect the warehouse and the documentation of how many were ordered.

A representative of the Fulton County elections department confirmed in an email that the boxes contained “extra Nov 3 ballots if we had to go all paper.” Doubters “can feel free to check how many were ordered and how many we still have unused.”

An official with the Georgia secretary of state’s office pointed Lead Stories to the “RULES OF THE STATE ELECTION BOARD”, which require each county to print at least enough emergency paper ballots for 10% of its registered voters (see page 10 of this document.)

Atlanta lawyer Lin Wood made the same claim in a December 13, 2020 tweet:

Lead Stories says: “It was false then and it is still false. The ballots are legally required and are not fake.”

Patrick Byrne also alleged that, “Rented Enterprise moving vans pulled up to the warehouse and began loading up” after the GA Senate Judiciary subcommittee voted to audit the ballots.

Patrick Byrne did not immediately respond to The Freedom Times to a request for comment over the alleged paper ballots.

Mr. Byrne also wrote, “what I learned this morning (from a federally certified forensic document examiner) about certain ballots in certain counties in a certain state, they are going to lynch every politician involved in this scheme. Starting with a certain [governor] and SOS.”

He noted that the information though “has to go through lawyers before” it’s publicly “released”.

Byrne posted a link to video from December 15th, but he claims to have more video footage from this week.

We leave you with Jovan Pulitzer who explained how he could audit paper ballots: