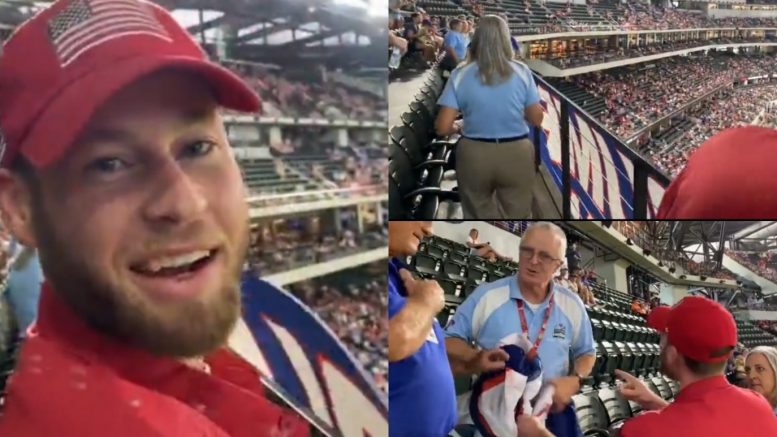 A ‘Trump Won’ banner was unfurled, yet again, at another Major League Baseball game — this time at the Texas Rangers’ stadium on Sunday.

Security quickly responded and took down the ‘flag’ before removing the fans who hung the sign in the seventh inning of the Rangers’ 4-3 win. The tail-end of the incident was caught on camera.

Donning a red cap with a American flag logo on the front and a Texas Rangers shirt, an unidentified male is seen in the video talking to several security members as they struggle to remove his ‘Trump Won’ banner.

“They stole our election though, you know,” the man in the red hat says as security tries to pull his flag away from him. “We’ll take it out. Relax guys. Everybody relax. Nobody got hurt. We’ll hold on to that.”

“Everybody knows Trump won,” the man said as he agreed to leave the stadium. “And they’re more upset because I have a flag than that our election was stolen.”

Then after reaching the concession area, security members informed the man that the Arlington Police Department were called to the scene.