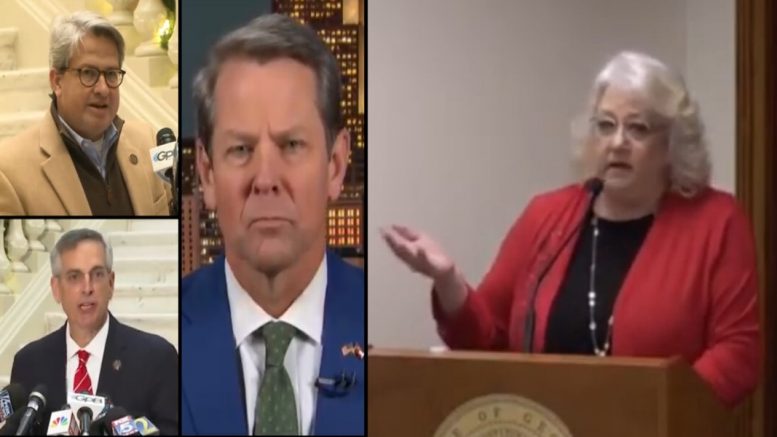 Sally Grubbs testified that she was present for the recount at Jim Miller Park in Cobb County, Georgia, which is an indoor and outdoor facility available to host major events such as weddings, meetings, concerts, trade shows, rodeos and festivals, but was used in area in the wake of the coronavirus.

Grubbs said that she witnessed voting irregularities and offered to provide video that she took and information about the mail-in-ballots. “It doesn’t seem to matter how much evidence we present, we’re gonna get the questions; ‘Are those actual ballots in there?’ First of all, in an election they seal the boxes with evidence tape, and it’s called evidence tape because those papers are evidence in the election. The envelopes are evidence and anything written that goes in the evidence box, is evidence,” she explained, after Susan Knox had testified about witnessing ballots being shredded.

“There should have been no shredding. In Cobb County, Georgia, Jim Miller Park is a fairground. … When I went to go observe, I asked what was going on in exhibit hall B and I was told, ‘You don’t need to stay in there, you don’t need to go in there. There’s nothing going on in there. You stay in exhibit hall C.’ In exhibit hall C, during the recount, is where they were sorting the absentee ballots into bins for rescanning. They were sorting the printed ballots for rescanning,” she continued.

Grubbs said she stood 6 feet away from the poll workers and claimed that she “got scolded, we got yelled at, we got belittled, we got harassed”. Continued Below

“I found out after the fact, in exhibit hall B where I was not allowed, there were two days of voter review panel activity going on with no Republican representation at all,” Grubbs alleged. “I was purposely told not to go in there. Ya’ll, I’m a business woman, I’m a mother of two wonderful boys, I am not an election specialist. I am a United States citizen and I am here to see and I participated, because I want to make sure our vote is protected.”

“When somebody called me and said they’re shredding ballots, I left work. People thought somebody in my family died. That’s how fast I left to go see what was going on, and Susan and I followed that shredding truck to see where it was going. I thought surely people care enough that when you’re on the phone with 9-11, the police would come. The police didn’t come. We went to the Cobb County precinct … to make a report; they wouldn’t take a report,” she reported.

Grubbs said she made a report with Secretary of State Brad Raffensperger, only to get an email with a response that claimed, “That’s routine shredding.” Continued Below

She went on to say that some of the Georgia officials, such as Gabe Sterling, an election official and the Georgia secretary of state’s office “have done nothing but obstruct, belittle, and bemoan.”

“I have Facebook posts right here,” Grubbs said. “And I would be happy to share with someone. Facebook posts? What does that mean? Well that means that anyone who keeps talking about election fraud, [be]cause it doesn’t exist, that they are the same as people from Iran. That’s what was posted, and so, I got into a conversation about that. And this was the post. Gabe Sterling posted this: ‘Iran has posted to ferment division in our nation. Those continuing to claim the election was stolen, are supporting the tactical actions of Iran'”.

“This is the State of Georgia. This is the city of Atlanta, and I want Mr. Sterling to answer for accusing people like me who have a job and children and family– I want him to come in here and explain to me how I’m like someone from Iran trying to steal an election!” Grubbs declared. “When we have seen the fraud, we have been lied to, we’ve been distracted, held up, and we’re tired of it.” Video Below

“And it’s time you people stand up. I have emailed legislatures. We have formed a group called the Angry Patriots of Georgia. And you can tell I’m angry. I am tired of people that we vote for to put in office are stabbing us in the back, and they’re not doing anything to protect anything,” Grubbs vented. “We have begged for you to convene the legislature. We have had people come out of state on their own dime. I have spent hundreds of my own dollars trying to get the point across. Susan has spent hundreds of dollars to get you people to listen.”

“I don’t know what it’s going to take. I honest to God don’t know what it’s going to take. Every legislature got a document that people don’t even bother to open. We are the citizens of this state, we deserve to be heard, and we are tired of it. How many people do we have to drag through here? I’m missing work right now. … We have begged to be heard, and I’m asking, are you hearing us yet? Is anyone hearing us yet? What do you need to know?” she wondered.

Trump On Biden’s 2nd Solo Press Conference: “How Come Biden Picks A Reporter Off A List…Then Reads The Answer?”