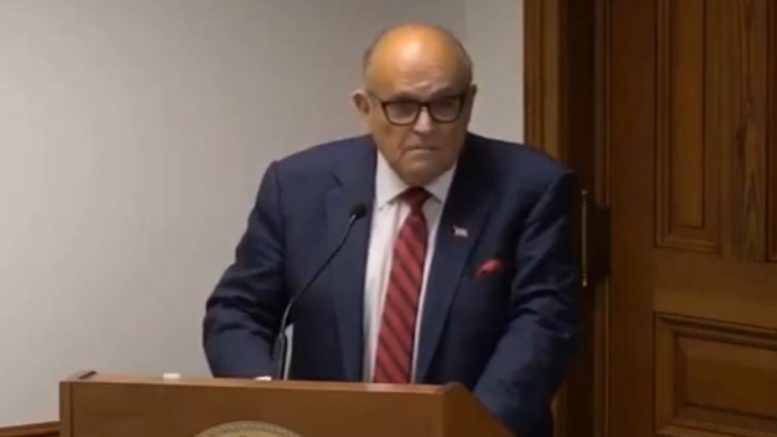 President Donald Trump’s personal attorney and the Trump campaign’s lead attorney, Rudy Giuliani, spoke to the committee members, imploring the lawmakers to “do the right thing” for “the American people”, and to “forget the criticism” that it may bring.

“Is there anybody that believes that Georgia submitted the right number of votes to Washington?” he asked. “Is there anyone that would like to put their name on an affidavit that that’s true and correct and take a risk at going to jail? As a lawyer, I would instruct you not to do that, because there’s not a person in Georgia or a person in the United States that believes those numbers are correct.”

The president’s attorney listed some of the alleged irregularities reported for the state of Georgia in the wake of the election. Mr. Giuliani said, “You had 2,560 felons vote. You had 15,700 people vote in Georgia who had changed their address before the election. You had 40K people fail to reregister before they voted.”

He continued: “You had 10,315 people that we can determine from obituaries were dead when they voted. That’s pretty tough to do, to vote when you’re dead. So right away, that number that you submitted to Washington is a lie! It’s not true, it’s false, minus 10K dead people. Those are the number of dead people we were able to figure out by looking at obituaries, because your secretary of state in engaged in what I consider an unlawful coverup. He won’t let us look at records.” Continued Below

Rudy Giuliani also spoke of the Dominion Voting Systems, comparing the voting machines to “swiss cheese”, saying, “You can invade them, you can get in them, change the vote, you can fractionalize the vote. Why would you ever fractionalize a vote? There’s not such a thing as half a vote or a quarter of a vote. Why would you have an election machine where you can change the vote?”

“The liars who run Dominion have said you can’t change the vote. Read the manual!” Giuliani declared. “Read their manual. Their manual says you can change the vote. Why should you be allowed to change a vote in a voting machine? Once that vote goes in there, that’s it. You shouldn’t be able to change it, you shouldn’t be able to move it from Trump to Biden or from Biden to Trump. Well you can do that in the Dominion machines.”

He then revealed, “Our people have inspected 22 Dominion machines. We’ve submitted affidavits– and they’re all ex-military people who did this work for the NSA and the United States government. Every time they would count in the machines, they would get a different count. They were able to move votes, a massive number of votes, from one side to the other. They caught in this county [Antrim County, Michigan] 6,000 votes having been moved from Trump to Biden, which had to be reversed. But those are the only machines we’ve ever gotten to look at. If 22 machines moved 6,000 votes, how many machines [do] you have here? How many votes do you think they moved?” Continued Below

“Let us examine the ballots … and the machines. Why are you stopping us from doing that? Why are you stopping the people from Georgia to find out if these allegations, which are made now by numerous witnesses … let’s find out how extensive it was. It’s easy to do, and it would take about 3 or 4 days,” Giuliani explained.

The president’s lawyer concluded by saying, “Our founding fathers miraculously envisioned everything that would happen to us. They even envisioned this: a disputed election, cheating, stealing. And they made a choice … where to put the responsibility in a difficult situation like that.” Continued Below

“[Article II] of the Constitution put that responsibility right here, in the legislatures of the several states. You are responsible for the selection of the electors, not the governor, not your secretary of state, who’s covering up everything he can cover up, not anybody else, but you. It’s your power. It doesn’t come from the state Constitution, it comes from the United States Constitution. You’re not subjected to needing a special session. The governor has no right really to interfere. … The Constitution has taken him out of the process,” he said.

“The Constitution put the power in the state legislation so strong that you can take that power back right up to the last moment. You could take it back 2 minutes before the Electoral Votes are counted, because ultimately it is your responsibility. You delegated it to them in the first place. And if you feel they are exercising it improperly, it is your obligation to stop them from doing it. And you know they exercised it improperly. You know that,” Mr. Giuliani told the lawmakers.

“… It’s ultimately a question of courage. Do you have the courage to stand up to the obligation to the Constitution of the United States, put on you to save our people from fraud, to save the reputation of the state of Georgia from in history, certifying a phony vote that led to the wrong result in our election, which will be the verdict of history? Or do you have the courage to put up with what’s going to happen, if in fact, you change that certification and do the right thing?” he asked. Video Below

“… I implore you, hold a session, take a vote, do the right thing and forget the criticism. … I implore you to do the right thing. Not necessary for President Trump … it has become much bigger than that; for the American people, and so this stops right now. No more of this stuff in America. This is the stuff you do in a third world country. We let them get away with this, it can get much worse. I thank you on behalf of my client and on behalf of the United States,” Rudy Giuliani expressed.