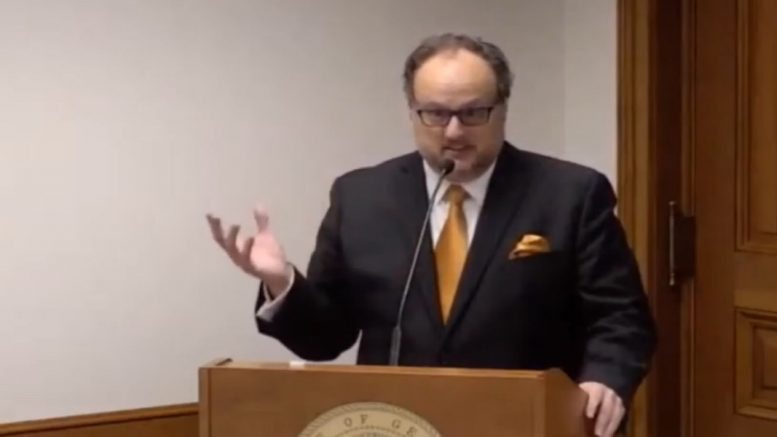 Jovan Hutton Pulitzer, expert and patent owner in barcode and QR code technologies, gave testimony before the committee, revealing that a team of white hack hackers gained access to a “poll pad” at Georgia’s polling station during the actual hearing with the legislatures.

“At this very moment, at a polling location in the county, not only do we now have access through the devices, to the poll pad, the system, but we are in,” Jovan Pulizer alleged to the Georgia lawmakers.

“And it’s not supposed to have Wi-Fi and that’s not supposed to be able to happen. So, we’ve documented now it’s communicating two ways, in real-time, meaning it’s receiving data and sending data– should never happen, shouldn’t be WIFI,” he said.

“We’ve now documented it in real-time, so we can suck down the data, and that’s going on right there where everybody’s voting, and I just wanted to get that into the record,” Pulizer emphasized.

Asked if the hacked machine was at a mobile precinct, Pulitzer replied, “No. It’s a standing building that this should not happen. We won’t disclose the location, [be]cause every location is being checked. But we’ve now confirmed it 100%. … This is coming through the polling pad device where they’re checking everything. … The most important part is that it shouldn’t be two-waying or even accessible or on, and it’s there.” Continued Below

(Related: Giuliani To GA State Legislatures: “Do You Have The Courage To Stand Up To The Obligation To The Constitution…Put On You To Save Our People From Fraud?”)

Pulitzer also explained, “Statistically what can be going on when you have an operation like this, is as that data is being exchanged and somebody is in it, can actually siphon off the date modify the date, and feed it right back into the system, or kind of do a pump and dump in real time.”

“It’s kind of like at home when we all use to have a dial up and you’re connected to the internet and doing what you’re doing and all your kids get on and the bandwidth goes down and everybody clogs. It creates that kind of atmosphere where not only are you in the system, but then once you get into the machine, you can do stuff in real time, changing its intent. That’s what it opens up,” he added. Video Below

He explains what a bad actor should do with this access. pic.twitter.com/wEC69DanbO