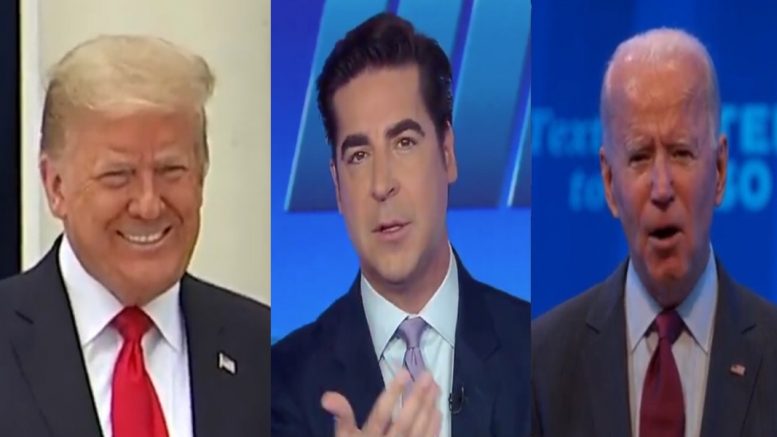 On the eve of the first presidential debate, Jesse Watters, co-host of Fox News‘ “The Five”, predicted why he thinks President Donald Trump will win despite what the media thinks, expressing that “it’s gonna get dirty, it’s gonna get nasty”.

The first debate kicks off at 9 p.m. ET Tuesday and is being hosted by Case Western Reserve University and the Cleveland Clinic, in Cleveland, Ohio and moderated by “Fox News Sunday” anchor Chris Wallace.

“Tomorrow night after the debate is over, millions of Americans are gonna know in their hearts that Donald Trump won, yet the media will tell them the next day that Joe Biden won, or that nothing happened to really change the dynamic of the race, a race that the media says Joe Biden is winning based on the polls that they’re conducting,” said Jesse Watters.

Watters said that the “American public digests these things very simply”, and then he clarified: “It’s based on attitude.”

“A large chuck of the population is not thinking about policy. They’re looking at the mix of aggression, tenacity, humor, style, and that’s what they’re judging on,” Watters suggested. “And they’re also looking at stage presence, who is projecting a calm, confident demeanor that’s projecting and resonating through that television screen to the American people.”

He expressed, “I don’t care if I’m setting the expectations too high. Donald Trump is a force of nature. He has got a huge personality, he’s got charisma, he’s got charm, he’s got aggression, he’s got everything that Joe Biden does not have.” Continued Below

(Related: Jesse Watters Reveals Proof Of Joe Biden’s Use Of A Teleprompter During At Least One Interview)

“So I predict tomorrow night, Joe Biden is a very insecure individual. I think he gets very frustrated and defensive when he’s asked to discuss his past record, and to a certain extent his family  especially. Hunter is like a raw nerve ending. You even go near it and he starts lashing out and getting angry,” Watters said.

"Tomorrow night, millions of Americans will know in their hearts that Donald Trump won, yet the media will tell them that Joe Biden won." #TheFive pic.twitter.com/wNI2kn9eFs

Voters are split on whether President Trump or Democratic nominee Joe Biden will win the first presidential debate on Tuesday, according to a new Harvard CAPS/Harris released exclusively to The Hill.

Fifty-one percent of respondents said Trump would walk away as the victor, while 49 percent said they believed Biden would be victorious.

The same survey found that that 62 percent of respondents said they thought the media was “easy” on Biden, while 35 percent said the same about Trump.