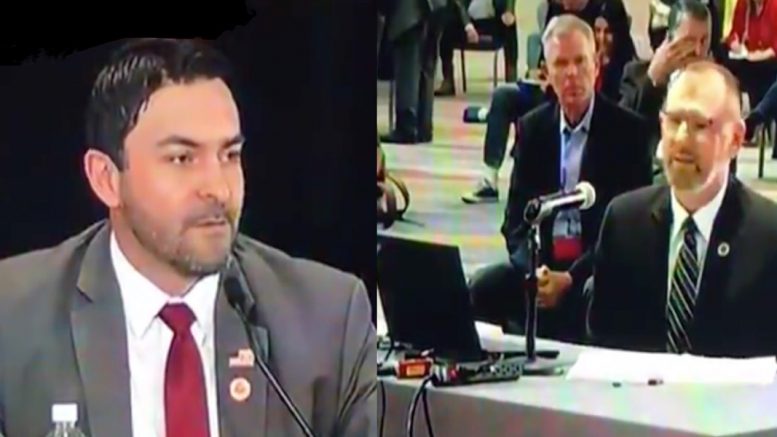 President Donald Trump’s attorneys Rudy Giuliani and Jenna Ellis, alongside witnesses, appeared in front of members of the Arizona Legislature on Monday, holding a hearing over election fraud.

The first witness to testify at the hearing was a cybersecurity expert dealing with intelligence and information warfare for some 30 years, retired Army Colonel Phil Waldron, who testified at the hearing about voting machines being connected to the internet.

The Commander in Chief announced in a tweet on November 17, that Chris Krebs, who ran the cyber arm of the Department of Homeland Security, was terminated following Krebs’ “recent statement” in the wake of the 2020 election.

Krebs’ agency, the Cybersecurity and Infrastructure Security Agency, had released a statement along with state and private election officials, claiming, “There is no evidence that any voting system deleted or lost votes, changed votes, or was in any way compromised”. Krebs also claimed that the general election was the “most secure in American history” and that the voting machines were not connected to the internet.

During his testimony Monday, Colonel Phil Waldron said that he is willing to say under oath that he has seen the connection to the internet and seen it go offshore to Frankfurt, Germany, regarding the voting machines.

“Yes, our white hat hackers, they have that traffic and the packets,” Colonel Waldron said, adding of Chris Krebs’ remarks, “Either not knowing, believing the myth, or not wanting the truth to be known.” Video Below

“The systems are connected to the internet,” Colonel Waldron reiterated. “Our teams looked at spider graphs to the Dominion network on election day. It showed the increase web traffic, internet traffic on election day for Dominion servers.”

Dominion was connected to the internet on election day.

Colonel Waldron explained more regarding voting machines being connected to the internet and using the SpiderFoot tool.

SpiderFoot is an OSINT (Open Source Intelligence) automation and reconnaissance tool, which its goal is to automate the process of gathering intelligence about a given target (IP address, domain name, hostname, network subnet, ASN, etc.), as reported by Cyber Punk.

(Related: Giuliani To AZ Legislature: “Your Political Career Is Worth Losing If You Can Save The Right To Vote In America”)