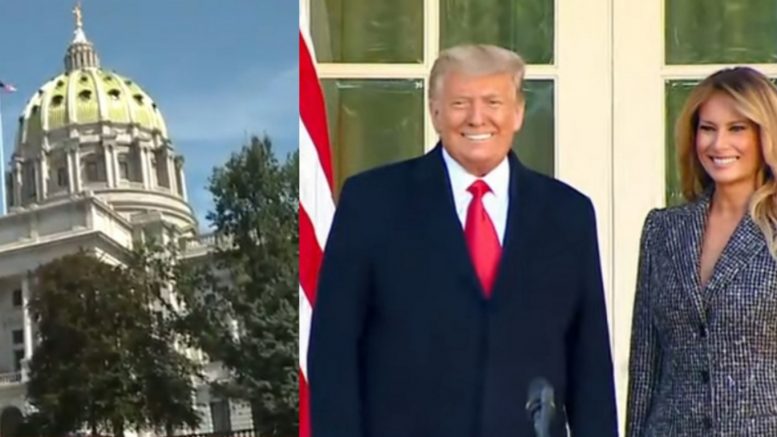 The legal team for President Donald Trump’s campaign was proud to announce that the Republican-controlled state legislatures in Pennsylvania, Arizona and Michigan will be holding public hearings, beginning on Wednesday to “provide confidence that all of the legal votes have beem counted and the illegal votes have not been counted in the November 3rd election.”

As indicated in a memo that was posted to President Trump’s website, Pennsylvania’s legislature will hold the first hearing on Wednesday in Gettysburg, PA, “where each participating Senator will give a five-minute opening statement followed by testimony from witnesses who have filed affidavits attesting to 2020 election fraud.”

Wednesday’s hearing will feature a presentation from none other than President Trump’s personal attorney Rudy Giuliani.

The next public hearing will be conducted by Arizona’s state legislature, which will take place next Monday, November 30. Michigan’s legislature will then follow up with a hearing that is scheduled for Tuesday, December 1. Details for the latter two hearings have yet to be disclosed.

Mayor Giuliani is quoted in the announcement as saying, “It’s in everyone’s interest to have a full vetting of election irregularities and fraud. And the only way to do this is with public hearings, complete with witnesses, videos, pictures and other evidence of illegalities from the November 3rd election.”

Trump campaign Senior Legal Advisor Jenna Ellis also commented: “We are pleased that the State Legislatures in Pennsylvania, Arizona and Michigan will be convening hearings to examine the November 3rd presidential election. There were serious irregularities, we have proof of fraud in a number of states, and it is important for all Americans to have faith in our electoral process. All we have wanted from the outset is to count every legal vote and discount every illegal vote.”

The following disclaimer was placed at the end of the announcement: State Legislatures are uniquely qualified and positioned to hold hearings on election irregularities and fraud before electors are chosen. As established in Article 2, Section 1.2 of the United States Constitution, State Legislatures have the sole authority to select their representatives to the Electoral College, providing a critical safeguard against voter fraud and election manipulation. Continued Below

In ending, here are some stunning new poll results President Trump tweeted on Tuesday night over whether or not he should concede to Joe Biden: