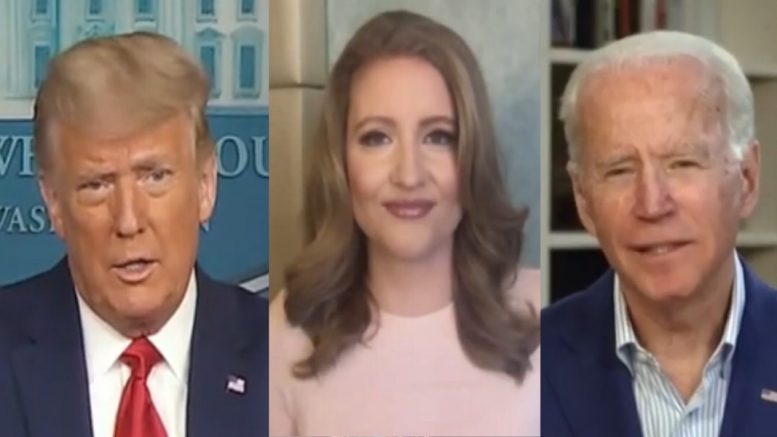 Jenna Ellis, Trump campaign senior legal adviser, downplayed the General Services Administration transition from President Donald Trump to Joe Biden during an interview with Newsmax’s John Bachman on Tuesday, suggesting that constitutionally, it does not matter.

Ellis weighed in after GSA Chief Emily Murphy informed Joe Biden on Monday that her agency has confirmed him as the winner of the 2020 presidential election and would move ahead with transition proceedings.

“Please know that I came to my decision independently, based on the law and available facts,” Emily Murphy said in a letter to Biden. “I was never directly or indirectly pressured by any Executive Branch official– including those who work at the White House or GSA– with regard to the substance or timing of my decision. To be clear, I did not receive any direction to delay my determination.”

Amid criticism that has been lobbed at her from Democrats, Murphy also noted, “I did, however, receive threats online, by phone, and by mail directed at my safety, my family, my staff, and even my pets in an effort to coerce me into making this determination prematurely. … Even in the face of thousands of threats, I always remained committed to upholding the law.”

Jenna Ellis told Newsmax’s John Bachman, “We’re seeing that unfortunately through so many people that are getting harassed and intimidated and have threats against them, their family, their pets even. This is just absolutely the most horrendous types of Soviet-style tactics that Democrat operatives are using. We’ve seen that not just against the officials who are demanding election integrity, we’re seeing that in the administration with Emily Murphy.”

“She doesn’t have any authority other than what the statute provides her letter with yesterday. … Her letter was so incredibly great because she said, ‘Listen, it’s not for me to decide whether or not the statute requires transition processes to be going when we’re in the mist of a legal battle. I’m not sure how to interpret that.’ That’s fully legitimate, but the problem Democrats had is she’s right. There are legal challenges, there’s no president-elect, and so she wasn’t sure what to do,” Ellis said. Continued Below

“The president, I’m very grateful that he put out that tweet yesterday that said, ‘Listen, for the sake of the county– [be]cause we don’t know what’s going to be the ultimate outcome here’, and so, he allowed for the GSA to do their job. And it’s just like both candidates during the campaign before election day, getting security briefings because there’s a possibility of both outcomes,” the president’s attorney said.

“We’re very aware we’re fighting an uphill battle, but we also know that the facts and truth are on our side, and so President Trump is doing what is best for the country. And it’s only the Democrats that are threatening our lawyers, myself included, simply for representing President Trump,” Ellis pointed out.

“We don’t have those same tactics. No one in America should stand for those tactics, and everyone should take a deep breath and realize the GSA is following the statutory provision here. It is absolutely meaningless to the outcome of the legal procedure,” she emphasized, downplaying the transition proceedings. Video Below

In a series of tweets, President Donald Trump thanked Emily Murphy on Monday for her handling of the ascertainment process since Election Day. He also pledged to continue his legal challenge of election results.

On Tuesday, the president praised Murphy for her “great job” and also noted that the “GSA does not determine who the next President of the United States will be”.