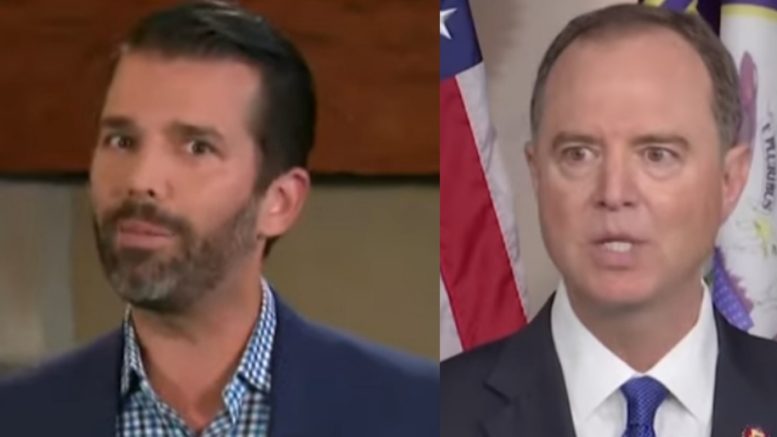 On Wednesday, The New York Times reported that Congressman Adam Schiff got an early account of the alleged whistleblower’s complaint in a twist that now brings more questions forward on how much of a role Democrats played in the situation as it unfolded.

Donald Trump Jr., who has remained relatively mum since the whistleblower story first came to light, broke his silence on Wednesday and unleashed a lengthy statement that highlights how everything is adding up to look like another “Kavanaugh” style plot with the help of Democrats to take down President Trump.

“What we’re seeing play out is exactly what we saw when they tried (and failed) to take down Kavanaugh in 2018:

“The Democrats—specifically Adam Schiff—are exclusively briefed on a bogus allegation.
*Partisan Democrats strategically advise this anonymous individual.
*Then they build and execute a media plan to damage the President, all while lying about their role in the whole process.

“Adam Schiff submitted a subpoena for the very document that he helped create, and stood in front of the American people and claimed he had no knowledge of this whistleblower. Continued Below

“The President is right, Adam Schiff should resign in disgrace, but the very least, he should recuse himself. He has lied to Americans and manipulated the media from the very beginning.

“If @RepAdamSchiff aka #FullOfSchiff is willing to go on to the floor of Congress to lie and reinvent the words of President Trump, it begs the question: How far did he go to influence and orchestrate this anonymous and phony whistleblower complaint?

“And for those who don’t know who Adam Schiff is, he is not just a radical liberal, he is someone who has been hand-picked and supported by George Soros. Continued Below

“An intelligence community whistleblower is required to go to directly to the Inspector General, before going to congress. The fact that this anonymous whistleblower went first to seek partisan advice from a George Soros *puppet* tells you everything you need to know… It’s just more of the same from the deep state.

“I’ll bet good money that the “whistleblower” turns up to be another partisan hack with deep ties to the Brennan/McCabe cabal.”

“Anyone who doesn’t see this yet is a fool or hasn’t been watching the last 3 years play out.

“The President is right, it’s time for the “do-nothing Democrats” to go back to work and start serving the constituents instead of themselves.”

In ending, here is video of Gutfeld going off on the latest revelations surrounding the whistleblower story:

Matthew Dowd Suggests Rep Gaetz Is Inferior To A “Tool”, Gaetz Fires Back: “Your Views Are The Definition Of Useless”