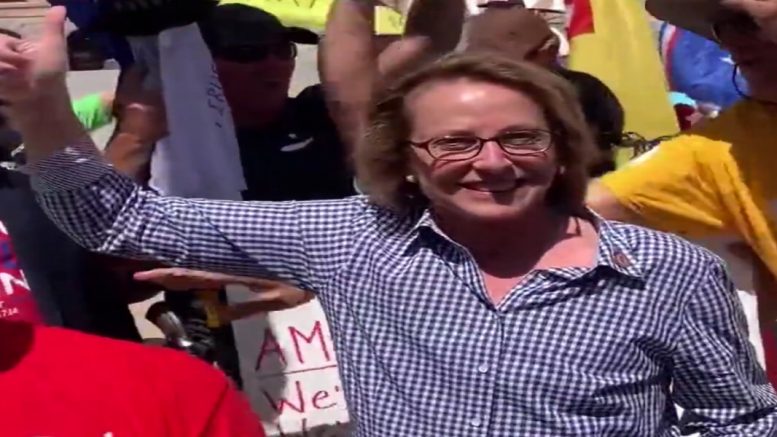 Senator Rogers, in July, called for a new 2020 presidential election in the state and demanded that officials decertify the election. Her call came after the Arizona state Senate held a hearing and an update to the 2020 general election audit, held in Maricopa County, conducted by Florida firm Cyber Ninjas.

“I have heard enough. With the tens of thousands of ballots mailed without being requested, the over ten thousand people who voted after registering after November 3rd, the failure of Maricopa to turn over the 40% machines, the passwords that Dominion still refuses to turn over, & tens of thousands of unauthorized queries demonstrating how insecure the election was, I call for the Biden electors to be recalled to Arizona & a new election must be conducted. Arizona’s electors must not be awarded fraudulently & we need to get this right,” Senator Rogers tweeted in July.

On Thursday, the retired Airforce Lt. Col. signaled that the Maricopa County forensic audit results will be publicly revealed in just over a week, as previously reported by The Freedom Times.

“The date to release the audit results is next Friday Sept 24th at 1 pm on the Senate floor. Because we have no hearing rooms it will be presented to Chairman Petersen and Senate President Fann. Gallery will be open to public,” she tweeted on Thursday.

The firm, Cyber Ninjas, was expected to turn over their full draft report to the Arizona Senate last month over the full forensic audit of the 2020 general election in Maricopa County; however, the process was delayed after three members of the company involved in the effort tested positive for COVID-19. Continued Below

Most recently, bombshell findings from a grassroots canvassing effort, led by Liz Harris, indicate 299,493 votes cast in Arizona’s 2020 election, were either lost, ghost or inaccurate votes.

Senator Rogers highlighted the results of the independent canvas, again calling for decertification. “CONCLUSION: ELECTION IN MARICOPA MUST BE DECERTIFIED”, she declared. Continued Below

“BREAKING: Our NATIONWIDE petition to #Decertify the 2020 President Election has reached 934,954 signatures. The audit results are coming on next Friday. I want to have AT LEAST 1 million signatures by then. Share & sign to help us reach our goal,” Senator Rogers tweeted on Friday.

BREAKING: Our NATIONWIDE petition to #Decertify the 2020 President Election has reached 934,954 signatures. The audit results are coming on next Friday. I want to have AT LEAST 1 million signatures by then. Share & sign to help us reach our goal: https://t.co/VgClJjWTwn

Senator Rogers, also on Friday, urged Americans to contact their local state reps and senators and find out if they “support audits, canvassing, and decertification”.

Last month, the Arizona State Senator announced that an Election Integrity Caucus consisting of lawmakers from all 50 states has been formed. “I am one of the founding members of the Election Integrity Caucus that consists of legislators from all 50 states. Reminds me of the Continental Congress,” Sen. Rogers said. “We will meet regularly and we will talk regularly to implement the securing our elections.”

Our Constitution gives plenary power over President Elections to the STATE legislatures. Please ask your state legislator and state senator if they support audits and if they do, introduce me to them on email [email protected] Does that make sense? (2/2)