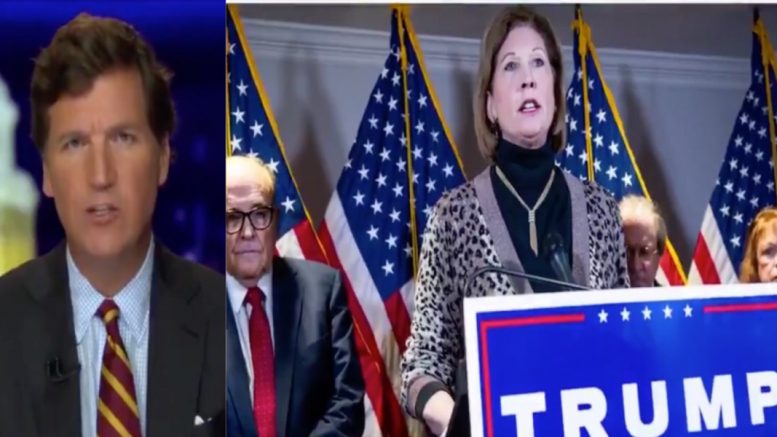 Sidney Powell, one of  President Donald Trump’s campaign lawyers, fired back Friday at Fox News host Tucker Carlson, saying he was “very insulting, demanding, and rude” after he criticized her Thursday for not giving him evidence of election fraud.

Carlson on Friday night, however, softened his tone toward Powell after facing mounting criticism, saying, “It is great news” if the president’s attorneys can “prove all” of the allegations of voter fraud in a court within the “next two weeks”.

“If Sidney Powell can prove the technology companies switched millions of votes and stole a presidential election, she will have almost singlehandedly uncovered the greatest crime in the history of this country, and no one will be more grateful for that than us,” Tucker Carlson expressed.

An update on our reporting on Sidney Powell’s voter fraud investigation. Watch. pic.twitter.com/ho6Dkv0IXf

General Michael Flynn was one of many who criticized Tucker Carlson on Friday, telling the Fox News host on Twitter, “Come on Tucker Carlson, you’re still not being genuine. [Sidney Powell] is slaying dragons with her small team and you sit on high and pontificate. Go do some street journalism and ask the tough questions yourself. Why the hell not!? @DineshDSouza. Joshua 1:9”.

General Flynn also wrote, “Tucker Carlson you are not being genuine in how you represented yourself to Sidney Powell. Why are you acting like a ‘Bell Ringer’ and not a real journalist as Dinesh D’Souza highlights in his outstanding video below. Seek truth not vengeance”.

He attached a video of Dinesh D’Souza, who gave tips to journalists and the media in the wake of the “dispute between Tucker Carlson and Sidney Powell”.

The dispute between Tucker Carlson and Sidney Powell points to a larger failure—the failure of the media to do anything resembling investigative journalism on this or any other story pic.twitter.com/LV4Lb9GG8o

(Related: Sidney Powell Steps To The Podium & Declares: “Trump Won By A Landslide & We Are Going To Prove It”)