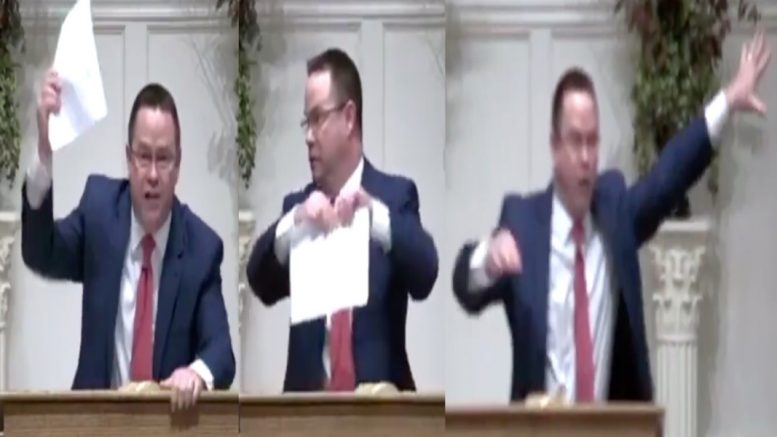 During mid-sermon, a Baltimore Pastor on Wednesday night tore up a cease-and-desist letter after local officials threatened a $5,000 fine earlier in the week for holding in-person services.

Maryland Gov. Larry Hogan announced last Friday that houses of worship could reopen at 50 percent capacity, citing declining hospitalizations related to the coronavirus pandemic. He left the timing up to local jurisdictions. The state has had more than 41,000 confirmed coronavirus cases and at least 2,081 deaths, Fox News reported.

Shiflett posted a video of the shredding on Twitter, in which he can be heard saying: “So news flash: Pharaoh doesn’t get to dictate to God’s people how they worship their God. God’s the one that defines the parameters. God’s the one that communicates his will and his plan for his church, not Egypt.”

“And I’m telling you right now, with this cease-and-desist letter in my hand, the Bible says to the New Testament church ‘not forsaking the assembling of yourselves together as the manner of some is, but so much more as you see the day approaching,’ and the closer we get to Jesus coming back, the more church we ought to be having, not less church,” he expressed.

“Now that’s God’s parameters. So I’m tearing up this cease-and-desist order right here, and I’m telling you right now, we’re gonna do it God’s way! … God tells us how to worship Him, nobody else gets to do that,” the Calvary Baptist Church Pastor declared. Video Below

Meanwhile, during a round table meeting with African American leaders and faith leaders in Michigan on Thursday, the president said churches were “important in terms of the psyche of our country” and warned that the country would be “broken” if the churches aren’t reopened.

“I think churches are essential,” President Trump expressed. “It’s so important. I think people want to be in churches. It’s wonderful to sit at home and watch something on a laptop, but it can never be the same as being in church with your friends.”

He said the CDC guidelines will be released “maybe tomorrow, maybe today.”

The king's heart is in the hand of the Lord, as the rivers of water: he turneth it whithersoever he will.
Proverbs 21:1 pic.twitter.com/8dne0ZpSqs

TRUMP: “The churches are not being treated with respect by a lot of the Democrat Governors. I want to get our churches open.” pic.twitter.com/OTsIplOtn3