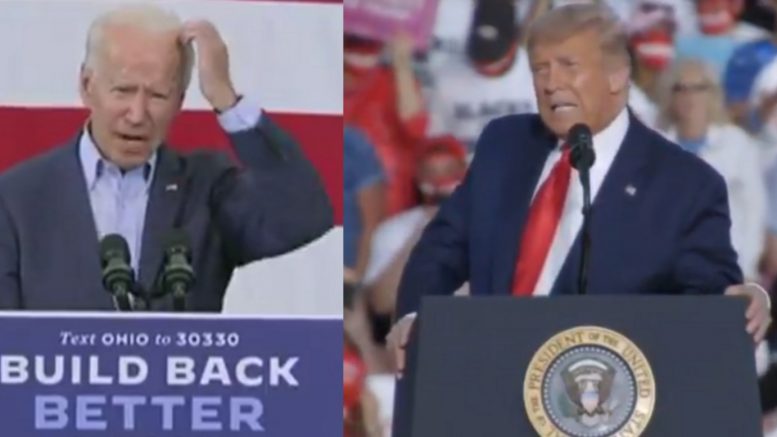 Joe Biden had one heck of a day on the campaign trail while stumping in Ohio on Monday.

In a matter of hours, the Democratic presidential nominee appeared to have forgotten the name of Utah Senator Mitt Romney, while he also claimed to be “running as a proud Democrat for the Senate.”

As he took questions from reporters after landing in Ohio, Biden recalled the time he “got in trouble” when speaking about Romney’s Mormon faith when Barack Obama faced off against him in the 2012 election. Biden, however, couldn’t seem to remember Romney’s name.

“You may remember, I got in trouble when we were running against the senator who was a Mormon, the governor, OK? And I took him on,” Biden said. “No one’s faith should be questioned.”

Later on Monday, Biden told his Toledo crowd, “”We have to come together, that’s why I’m running as a proud Democrat for the Senate.”

Joe Biden: "We have to come together, that's why I'm running as a proud Democrat for the Senate"

Add it to the list of times he's forgotten where he is or what office he's running for pic.twitter.com/yiOrlzsHwo

This marked the second time since beginning his campaign for President, that Mr. Biden said that he was running for Senate.

President Donald Trump couldn’t help calling out his opponent for over his “very bad day” on the campaign trail as he blasted Biden on Twitter and at his rally in Sanford, Florida.

“[Joe Biden] had a very bad day today,” Trump told his crowd of supporters in Sanford. “If I ever had a day like he had today, they’d say, ‘It’s over.'”

“Biden had a bad day,” he reiterated. “He forgot Mitt Romney’s name, he didn’t know what state he was in, and he said today he’s a proud Democrat running for the U.S. Senate…It’s the second time. Could you imagine if I did that?”