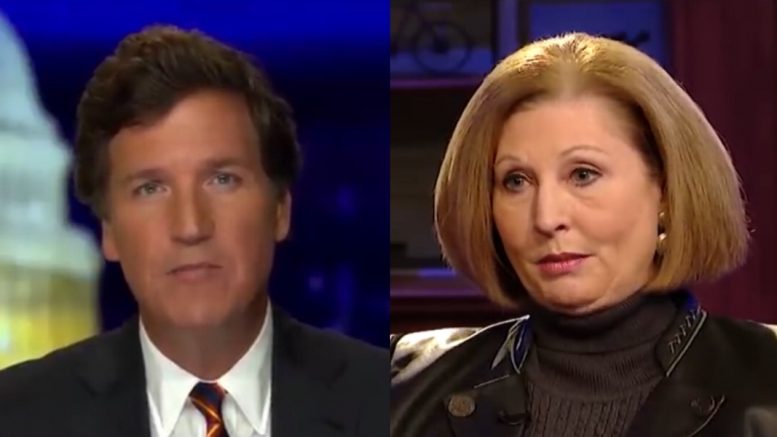 Sidney Powell, one of  President Donald Trump’s campaign lawyers, fired back Friday at Fox News host Tucker Carlson, saying he was “very insulting, demanding, and rude” after he criticized her for not giving him evidence of election fraud.

Carlson, on Thursday, told his audience that he had asked Powell politely for evidence and would have had her on the show but the president’s attorney declined. However, Powell said that she “offered him another witness who could explain the mathematics and statistically evidence”.

“On Sunday night we texted [Sidney Powell] after watching one of her segments. What Powell was describing would amount to one of the single greatest crime in American history– millions of votes stolen in a day. Democracy destroyed. The end of our century’s old system of government, not a small thing,” Tucker Carlson said on Thursday.

“Now to be clear, we did not dismiss any of it. We don’t dismiss anything anymore, particularly when it’s technology. … After 4 years, this may be the most open minded show on television. … A lot of people with impressive setting credentials in this country are frauds. They have no idea what they’re doing. They’re children posing as authorities. When they’re caught, they lie and they blame you for it,” Carlson continued.

“We see that everyday. It’s the central theme of this show and we’ll continue to be. That’s a long of way saying we took Sidney Powell seriously. We have no intention of fighting with her, we’ve always respected her work. We simply want to see the details. How could you not want to see them? We invited Sidney Powell on the show. We would’ve given her the whole hour. We would’ve given her the entire week, actually, and listened quietly the whole time at rapt attention. That’s a big story,” he went on to say.

“But she never sent us any evidence, despite a lot of requests, polite requests. When we kept pressing, she got angry and told us to stop contacting her,” Carlson said. “When we checked with others around the Trump campaign, people in positions of authority, they told us Powell has never given them any evidence either, nor did she provide any today at the press conference. Powell did say that electronic voting is dangerous, and she’s right, but she never demonstrated that a single actual vote was moved illegitimately by software from one candidate to another. Not one,” Carlson added. Continued Below

“I would continue to encourage him and all journalists to review all the materials we have provided so far and conduct their own investigations. Evidence continues to pour in, but a 5 minute television hit is not my focus now. Collecting evidence and preparing the case are my top priorities,” Powell added.

“In fact, I sent an affidavit to Tucker that I had not even attached to a pleading yet to help him understand the situation, and I offered him another witness who could explain the mathematics and statistically evidence far better than I can. I’m not really a numbers person,” Powell told Bartiromo.

“But he was very insulting, demanding, and rude, and I told him not to contact me again in those terms,” she fired back, referring to Carlson.

.@TuckerCarlson says his show is open minded — “we literally do UFO segments” — but Sidney Powell has produced no evidence of malicious software vote-switching and when pressed for it she told Tucker's show to stop contacting her. pic.twitter.com/sjqJZ8RDDx

… and conduct their own investigations. Evidence continues to pour in, but a 5 minute television hit is not my focus now.  Collecting evidence and preparing the case are my top priorities.”

Powell also retweeted this picture on Friday from Barbara Flynn:

(Related: Sidney Powell Steps To The Podium & Declares: “Trump Won By A Landslide & We Are Going To Prove It”)