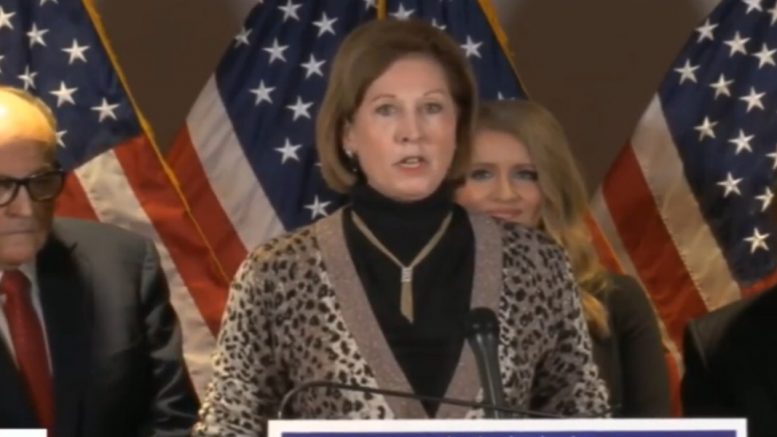 During an explosive news conference Thursday over the election legal challenges, Sidney Powell, one of President Trump’s lawyers for the Trump campaign, discussed the use of Dominion Voting Systems and Smartmatic software, among others, alleging vote counting was temporarily stopped in various states because the algorithm for voting machines was not programmed to manipulate such a high number of votes that were cast for President Trump, and systems had to be tweaked in order to “backfill votes or destroy votes for Trump while they fabricated votes for Biden.”

Powell declared to the American public and to the world, “[President] Trump won by a landslide. We are going to prove it”.

Sidney Powell suspects that “many of the jurisdictions might not have known of the issues, but many did”, referring to the voting machines that may have potentially changed votes, adding, “I think a full scale criminal investigation needs to be undertaken immediately by the Department of Justice and by every state’s equivalent attorney general’s office or state investigatory unit, because there’s evidence of different benefits being provided to the people who spent 100 million dollars of tax payer money at the last minute for their state to get the Dominion Voting Systems put in– in time for this election in different ways”.

Powell reported that a lawyer told her that “one person got election insurance”, clarifying, “Meaning that he would be able to make sure he was elected. I’m sure they explained that feature in detail to many people who expressed interest in putting this voting system in.”

“Texas denied certification of the Dominion system in 2019, but there are no doubt issues with the software that Texas did use unbeknownst to Texas, I would imagine since they went to great trouble to examine the Dominion systems and reject them. But other software– the source code that does the alterations is embedded, we have been told, in the source code all across the country and all of the voting machines,” she explained.

Powell continued: “There is no doubt it has been used to alter elections in other countries. We know specifically that Venezuela supported it for that purpose to Argentina and other Latin American companies to make sure that the corrupt rulers who were willing to pay the highest price for being in office were allowed to rig their elections.” Continued Below

“This is stunning, heartbreaking, infuriating and the most unpatriotic acts I can even imagine for people in this country to have participated in– in any way, shape, or form,” Powell expressed.

“President Trump won by a landslide. We are going to prove it, and we are going to reclaim the United States of America for those people who vote for freedom,” Powell declared. Video Below

Trump campaign attorney Sidney Powell says "President Trump won by a landslide. We are going to prove it." pic.twitter.com/AYTe1usmsk

(Related: Sidney Powell Estimates Over 80 Million People Voted For Trump: “The Will Of The People In This Country Was That Trump Win In A Landslide”)