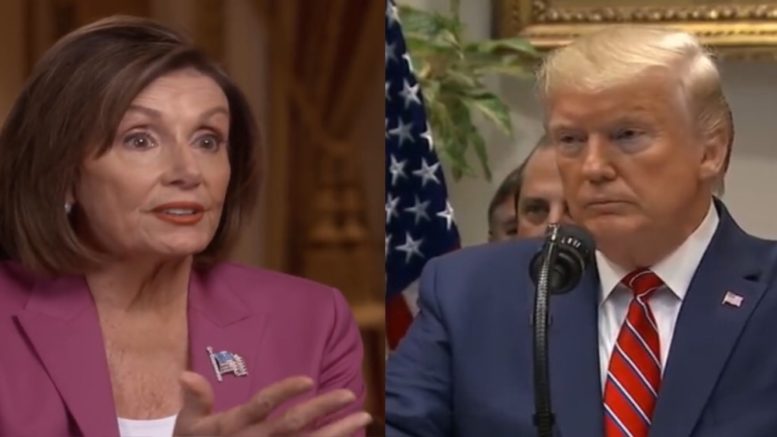 President Trump took to Twitter Monday to respond to comments made by House Speaker Nancy Pelosi (D-CA) that she made during an interview Sunday on CBS’ “Face The Nation”.

Amid the Democratic-led House impeachment inquiry, Pelosi told host Margaret Brennan that she invites the President to “come before the committee” to testify, or he could “do it in writing” to present his case.

“He could come right before the committee and speak all the truth he wants if he wants to take the oath of office, or he could do it in writing. He has every opportunity to present his case,” Nancy Pelosi told Margaret Brennan.

In the same interview, Pelosi also called the President an “imposter” while discussing President Trump’s tweet about former Ambassador Marie Yovanovitch, as she testified in Friday’s public impeachment hearing. “He should not frivolously throw out insults, but that’s what he does,” Pelosi said. “I think part of it is his own insecurity as an imposter. I think he knows full well he’s in that office way over his head.”

Last week during a press conference, Pelosi accused President Trump of committing “bribery” along with claiming that the Commander in Chief’s “efforts to cover up his betrayal of his oath of office, almost make the things Nixon did look small.” She further claimed she is upholding the Constitution, but added that President Donald Trump “must prove his innocence.” (Continued Below)

“Our Crazy, Do Nothing (where’s USMCA, infrastructure, lower drug pricing & much more?) Speaker of the House, Nervous Nancy Pelosi, who is petrified by her Radical Left knowing she will soon be gone (they & Fake News Media are her BOSS), suggested on Sunday’s DEFACE THE NATION that I testify about the phony Impeachment Witch Hunt,” President Trump wrote on Twitter Monday.

“She also said I could do it in writing. Even though I did nothing wrong, and don’t like giving credibility to this No Due Process Hoax, I like the idea & will, in order to get Congress focused again, strongly consider it!” he expressed. (Video Below) 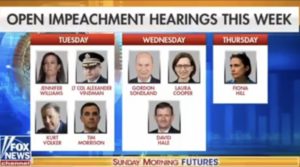 On Wednesday, Gordan Sondland, U.S. Ambassador to the European Union, Laura Cooper, deputy assistant secretary at the Defense Department, and David Hale, under secretary of state for political affairs, will testify. Fiona Hill, former Russia specialist on the NSC, will deliver the final testimony of the week Thursday.

President Trump also tweeted on Monday, “Never has the Republican Party been so united as it is now. 95% A.R. This is a great fraud being played out against the American people by the Fake News Media & their partner, the Do Nothing Democrats. The rules are rigged by Pelosi & Schiff, but we are winning, and we will win!”

Then, the Commander in Chief noted that Congressman Jeff Van Drew (D-NJ) slammed democrats for their impeachment probe. Van Drew told Fox News host Maria Bartiromo on Sunday, that he won’t be voting for impeachment.

Trump Reacts to $40 Billion Ukraine Bill: ‘Get Europe & Others to Finally Pay Their Fair Share’