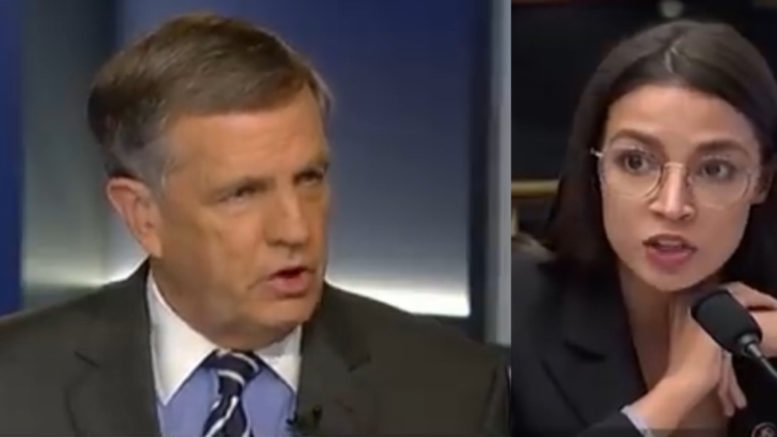 On Thursday, before the House of Represents voted on the Democrats’ “impeachment resolution“, President Donald Trump took to Twitter where he declared, “READ THE TRANSCRIPT!”

The measure passed 232-196. No Republicans voted for the measure, but two Democrats broke with their party and voted against the resolution: Rep. Collin Peterson (D-MN) and Jeff Van Drew (D-NJ). The House will now leave for a 12-day vacation.

Rep. Alexandria Ocasio-Cortez responded to President Trump Thursday on Twitter after he recommended to “read the transcript”. She wrote, “We did. That’s why we opened an impeachment inquiry.”

However, Fox News’ Sr. Political Analyst, Brit Hume, fact-checked AOC’s claim that the inquiry was opened “after” reading the transcript.

Hume tweeted in response to AOC: “Clever riposte, except that Pelosi announced the impeachment inquiry the day before the transcript was released.”

House Speaker Nancy Pelosi (D-CA) formally announced on Tuesday, September 24 that she was moving forward with an “impeachment inquiry” into President Trump. She specifically charged that the White House had violated the law by not turning over a whistleblower complaint concerning Trump’s July call with Ukrainian President Volodymyr Zelensky. (Continued Below)

That same day, the Commander in Chief announced on Twitter that he would make a “complete” transcript of his phone call public on Wednesday, September 25.

“I am currently at the United Nations representing our Country, but have authorized the release tomorrow of the complete, fully declassified and unredacted transcript of my phone conversation with President Zelensky of Ukraine,” the President wrote. “You will see it was a very friendly and totally appropriate call. No pressure and, unlike Joe Biden and his son, NO quid pro quo! This is nothing more than a continuation of the Greatest and most Destructive Witch Hunt of all time!”

As promised, the White House released a transcript the following morning of President Trump’s phone call in July with Ukranian President Volodymyr Zelensky. Upon the release of the transcript, House Minority Leader, Kevin McCarthy (R-CA) slammed Pelosi during a press conference for “lying to America” and demanded that she apologizes to the nation, because Democrats accused the President, before the release of the phone call, of essentially pressuring a foreign power to investigate a political opponent and claiming there was a “quid pro quo”. (Continued Below)

On Thursday of that week, the day after the transcript was released, the House Intelligence Committee held a hearing to interview acting Director of National Intelligence Joseph Maguire pertaining to the July 25 phone call between Trump and Zelensky, the transcript of that call, and a whistleblower complaint about the call. The whistleblower complaint was released moments before the hearing started.

Schiff admitted later that his blatant fabrication of quotes from President Trump’s Ukraine call was “wrong”, and after he got called out and claimed it was a “parody”. (Continued Below)

We did. That’s why we opened an impeachment inquiry. https://t.co/KGxue9TEvZ

Clever riposte, except that Pelosi announced the impeachment inquiry the day before the transcript was released. https://t.co/FgABNfoiMQ

(Related: Comey Asks For A ‘Quick’ Apology From His Critics, Brit Hume Turns The Tables: How About Sorry I Violated Both Policy & Contract?)

Nunes On Spy-Gate: ‘When They Didn’t Find Anything, They Made It Up & They Framed A Sitting President Of The United States’