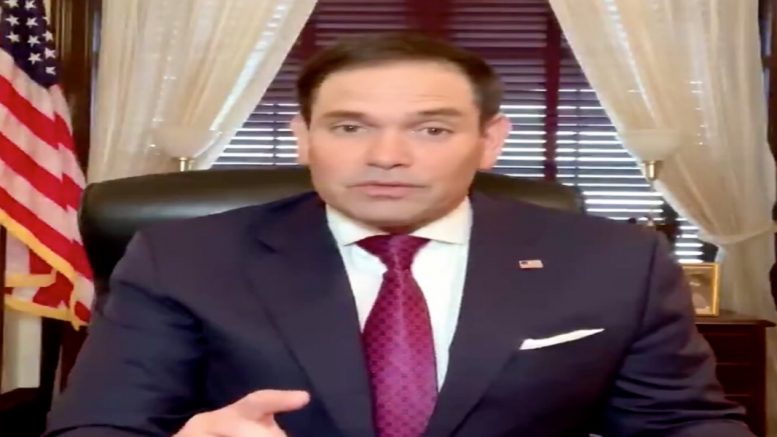 Senator Marco Rubio (R-FL) posted a video on Twitter Tuesday in the wake of the post-election, slamming the media for being angry that Republicans don’t trust their projection– and recommended they “need some awareness”.

“The legitimacy of our Republic requires public confidence in our elections; the fact that 70% of Republicans don’t believe the 2020 election was free and fair, that should be of concern to everyone,” the Florida senator insisted.

“That’s why both sides should support allowing the post-election process provided for in our laws to work, to move forward. Our election laws call for recounts in close elections,” Senator Rubio explained. “They provide candidates the right to contest votes cast in violation of the law”.

“They allow the right to present evidence of fraud, if you have it; present that evidence in court. And they require meeting specific deadlines for all [of] this, so the winner can be certified and take office,” he continued.

The Florida senator pointed out that “both Democrat and Republican candidate have used these laws themselves”, adding, “They’ve availed themselves to these rights many times, including in this election.”

Senator Rubio also reminded viewers that Joe Biden himself “hired an army of election lawyers to use this very process if he had fallen short in the preliminary results”, noting, “And therefore, President Trump is well within his legal rights to pursue all these things under these laws now.” Continued Below

“Now for those in the media who are angry that Republicans won’t just take their word for it– that Biden won, I think you need some self awareness,” Senator Rubio said, then clarified.

“You spent four years claiming the Russians hacked the last election. You supported Democrats when they went to court to overturn the governor’s race in Georgia in 2018, and you say nothing, when to this day, they claim that they won that race. And you railed against how dangerous Trump rallies were, but now you seem to have no problem with Biden supporters celebrating in big crowds,” the Florida Senator said, slamming the media.

“I think Republicans have good reason to believe that some of you are just a little biased. The only way the outcome of this election is going to be widely accepted, which is what we need, is through the post-election process in our laws,” he suggested. Video Below

Here is some video footage of what Senator Rubio was referring to after establishment media projected Joe Biden as the winner of the election:

Where is @JoeBiden calling on the massive Super Spreader events held in his name to end❓ ⬇️ pic.twitter.com/8JaofpgMge

Sen. McConnell: ‘I Cannot & Will Not Support Judge Jackson for a Lifetime Appointment to the Supreme Court’