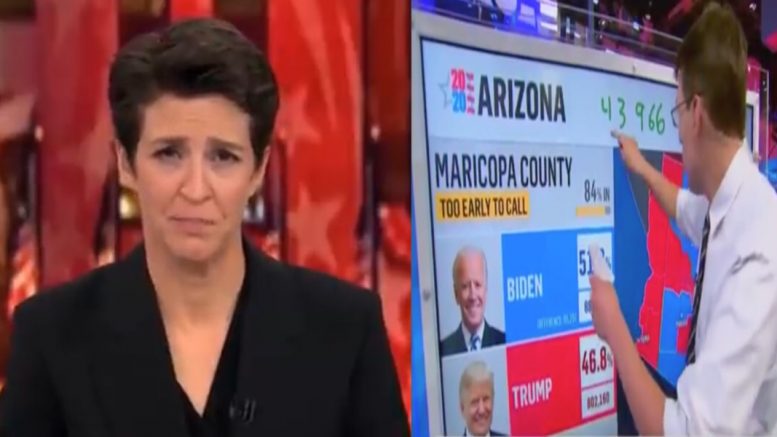 State officials say there are about 450,000 votes still to be counted in Arizona, with Democrat Joe Biden leading currently by 68,000 votes. Though hundreds of thousands of votes have yet been unaccounted for, Fox News and the Associated Press called the race in in the Grand Canyon state for Biden Tuesday evening.

The Trump campaign has since declared that the President has a very good chance of winning Arizona based on mathematical models regarding the remaining votes, and has demanded that the network along with the Associated Press retract their projections. However, Fox News and the AP continue to stand firm by their data, as previously reported by The Freedom Times.

The vast majority of the ballots still being counted are from Maricopa County, the most populous area of the state. The next update from elections officials in Arizona is expected around 9 p.m. EST, reported AP.

Following a dump of 75, 000 ballots reported in Arizona on Wednesday, President Trump won 43, 966. Joe Biden won 30, 322. NBC News correspondent Steve Kornacki reported, “Donald Trump is getting around 59% of these votes”.

“The first bucket was early– Biden won it by 10. The second bucket was the same day, Trump won it by 26. The third bucket, you’re looking at the start of that– now this is not all of it. What we just got here again, is about 75,000 votes. Now remember, they said there’s about 400,000 and change to come out of Maricopa County. So we got 75,000 of 400,000+ out of Maricopa County. This pace of 59% for Trump– it might change as more ballots are added in to here. Let’s see. But this at least establishes, I think up front, a possibly here that this third bucket of votes is a Trump favorable bucket of votes,” Steve Kornacki reported. Video Below

Rachel Maddow’s reaction to President Trump’s gains in the Arizona:

The News-Herald in Arizona knows…

ARIZONA IS STILL IN PLAY! @AP @FoxNews must RESCIND their premature call! pic.twitter.com/X9gIdawXCk

After Being Called A ‘Damn Liar’ By Joe Biden, Voter Has A Standoff With Another Voter: “Stick It Up Your A–, Fella”