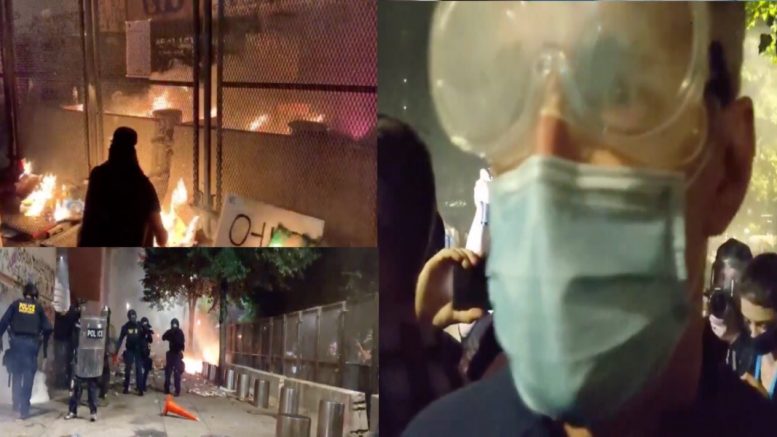 Democratic Mayor Ted Wheeler of Portland, Oregon was tear gassed while he was at the federal courthouse with protesters Wednesday night. He was accompanied by “at least four body guards”, according to reporter Andy Ngo.

“I’m not gonna lie, it stings, it’s hard to breathe,” Wheeler said. “Man, uh, I can tell you with 100% honesty, I saw nothing that provoked this response. It’s absolutely stunning. I’m not afraid, but I am pissed off.”

The video shows Ted Wheeler was near the fence around the Federal Courthouse as flash bangs and tear gas were being deployed by federal officers.

Be a shame if this video exposing Ted Wheeler went viral. Please do not RT. https://t.co/ZvU6qRo1YP

“I want to thank the thousands of you who have come out to oppose the Trump administration’s occupation of this city,” Wheeler told the protesters, according to the Associated Press. “The reason this is important is it is not just happening in Portland … we’re on the front line here in Portland,” Wheeler said.

Meanwhile, Wheeler was insulted and shouted down by the very people he joined to fight against the federal government, who is trying to help the police and protect Portland’s federal buildings.

President Donald Trump took to Twitter Thursday, pointing out that Wheeler, the “Radical Left Mayor of Portland … was booed & shouted out of existence by the agitators & anarchists”. Video Below

Freelance journalist Sergio Olmos tweeted a video of protesters screaming at Wheeler; “Get the f–k outta here!” a protester could be heard yelling.

Mayor @tedwheeler gets a water bottle thrown, pushed around a little bit, but walks at same pace pic.twitter.com/bQE8Y3bArq

Rioters curse at Portland Mayor @tedwheeler and throw water at him. He’s protected by a large security team. He came out to support the protest. #PortlandRiots pic.twitter.com/DqkuUZrxcB

Portland Mayor @tedwheeler joins mob by heading to the barrier protecting the federal courthouse. Ash from the arson, smoke and tear gas fill the air. He has at least four body guards protecting him. #PortlandRiots #antifa pic.twitter.com/XnGLhz4xI9

Mayor Ted Wheeler seems to have everything under control

Federal law enforcement are pelted with projectiles every time they make an arrest at the Portland federal courthouse. #PortlandRiots #antifa pic.twitter.com/WOIytj5G3v

After Wheeler left, the police called the protests an official riot.

A riot has been declared outside the Justice Center. Disperse to the north and/or west. Disperse immediately. Failure to adhere to this order may subject you to arrest or citation, or riot control agents, including, but not limited to, tear gas and/or impact weapons.

Wheeler was also asked point-blank if he would commit to abolishing the police bureau, to which he said he did not support that.

Wednesday marked the 56th night in a row of protests in Portland, Oregon. Dan Springer reports from Seattle.

(Related: Mayor Lightfoot: “Under No Circumstances Will I Allow Donald Trump’s Troops To Come To Chicago”)