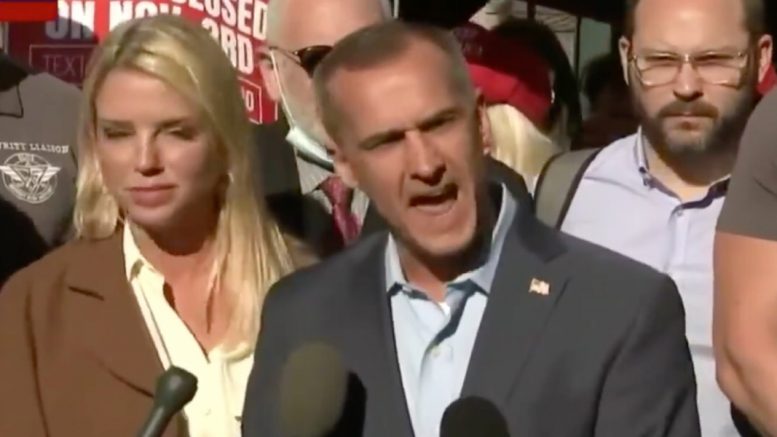 The Trump Campaign spoke to reporters Thursday about a court order concerning their team being able to observe from a closer stance the mail-in ballot vote count in Philadelphia.

“Big legal win in Pennsylvania!” the Commander in Chief tweeted after a court in Pennsylvania ruled on Thursday morning that GOP observers must be allowed to watch ballot counting across the state. The court order allows GOP observers to stand within six feet of the counting when previously such observers had been pushed back much further.

PA appellate court orders that vote count observers must be allowed within 6 feet of the canvassing process – previously were forced 20+ feet away pic.twitter.com/WSxbPCNDjU

Following the court order, however, Pam Bondi, former Florida Attorney General and Trump 2020 campaign adviser, told reporters “They are still not in compliance. … They have moved the barrier up to 6 feet, but they took away the ballot machines that were in the front row and moved them to the back of the building. It’s unbelievable what they’re trying to do to our votes that have been legally cast.”

“Whether you’re a Democrat or a Republican, your legal votes must be tabulated and they’re not doing that. They will not let us see anything. … We’re not going away. … We’re not gonna stand for this, we are not going anywhere. They are defying a court order by a judge. And this is not the last of this,” she said.

Former 2016 campaign manager for Donald Trump, Corey Lewandowski, also spoke to reporters and went off amid claims over a Philadelphia sheriff who reportedly would not enforce the court order, demanding to know: “What are you hiding?!” Video Below

“Listen guys, your tax payer money here in the city of Philadelphia is going to a private attorney by the name of Michele Hangley, and what she said was she would determine if the court order was valid or not. I’ll be happy to release the video of her. They have 8 attorneys fighting us to see these ballots inside,” Lewandowski said.

“The court order is in effect. They will not give us access, and the sheriff has decided not to come down here to enforce that court order. The Sheriff of your county will not come down and enforce a court order. What is going on in this city?! What are you hiding?! Open up the doors, let us in. Let us 6 feet away so that we can have a free and fair election,” he demanded.

“Whether you voted for Donald Trump or Joe Biden, everybody has a right to witness what’s transpiring here. This makes it look like a kangaroo court. We deserve better, and we’re not leaving until we witness every single vote that transpires in here,” Lewandowski announced.

Update: This is a JOKE. They moved the fence up but moved the ballot machines back!! This is offensive for the great people of Pennsylvania who voted and deserve a fair election. @realDonaldTrump @TeamTrump