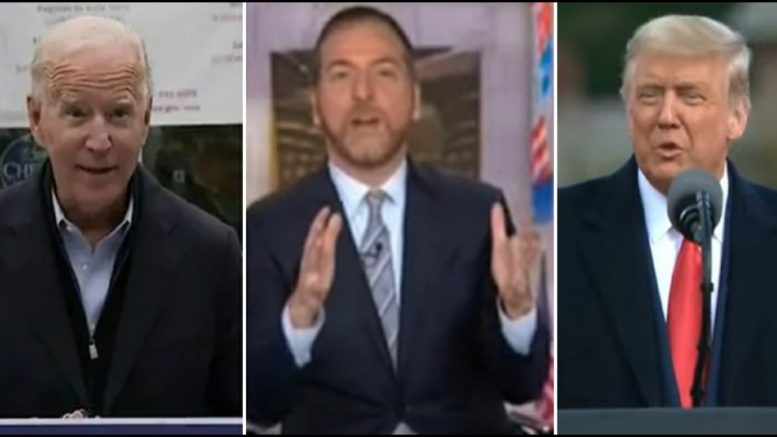 With only a few days until the election, President Donald Trump is finally getting some recognition from his antagonists in the media over his astounding physical presence in states while campaigning versus that of former Vice President Joe Biden.

NBC’s Chuck Todd highlighted the stark contrast between the two presidential candidates during Sunday’s airing of Meet The Press.

Related Article: ABC’s Jon Karl Admits That Trump’s ‘All-Out Sprint To Election Day’ Is ‘Something Of A Marvel’

Todd rolled out two maps that pinpointed where Biden made campaign stops since the final debate on October 22 and compared it to where President Trump has made stops.

The difference between to the two maps was compelling, as Todd showed that Biden made only 14 campaign stops in a total of 7 states while President Trump has held 26 events in a total of 12 states since the final debate.

“Basically, about double the amount of stops in states,” Todd pointed out. Video Below

Kirstie Alley Issues A Defiant Statement In Response To Messing’s Blacklist Idea: ‘STOP ACTING Above The FRAY, Ya Damn Hypocrites’