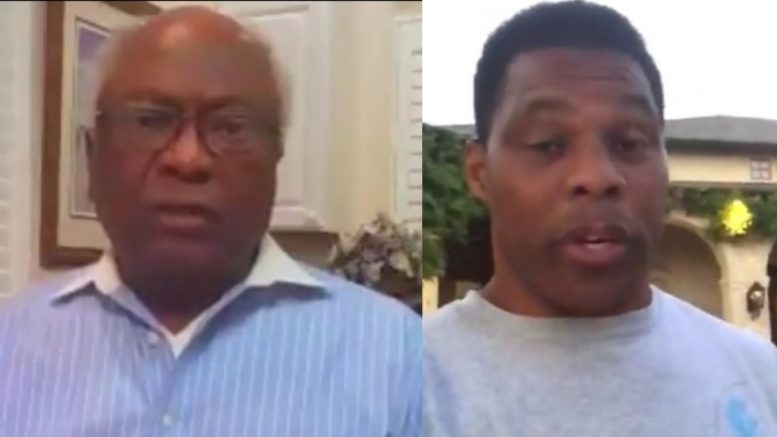 NFL legend Herschel Walker fired back at House Majority Whip James Clyburn over remarks he made towards Black Americans during a recent interview on Fox News.

Rep. Clyburn told hosts Martha MacCallum and Bret Baier that he will “pray” for Black men and women who cast a vote for President Donald Trump in the election, a statement which Baier likened to the time Joe Biden said “you ain’t Black” if you vote for President Trump.

Rep. Clyburn was likely referencing the time when President Trump tweeted that former White House aide Omarosa Manigault Newman was a “dog” and “low-life” over allegations she made about him back in 2018. Although, Trump has been known to call his critics and opponents “dogs,” regardless of their race and gender.

In response, Herschel Walker posted a video to his Twitter account, where he called out Clyburn for taking Trump’ remarks “out of context,” and suggested the Congressman is doing it “just to get a vote.”

Walker, who is a major supporter of President Trump, began by sarcastically thanking Clyburn for praying for him.

“That’s the first time I really have heard a Democrat — anyone from the Democratic Party talking about praying for anybody Jesus or God or anything, like that. And I do thank you for that,” Herschel said.

“But I’m going to pray for you as well because you took the president a little bit out of context, which is okay because the Democrats have been doing that for a long time just to get a vote and I think that’s what you’re doing right now,” he said.

“You’ve been in office a long time too, and remember, we keep hearing that systemic racism [has]been around a long time, which means that you pass laws, or you try to get things passed. Think about it,” Walker concluded. Video Below