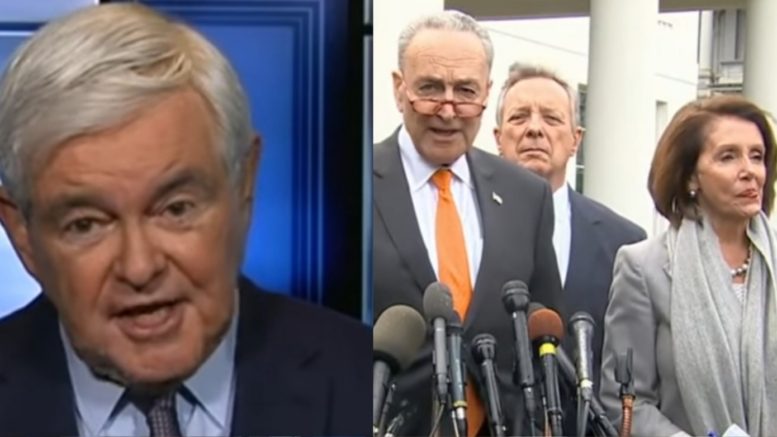 As the partial government shutdown surpasses 21 days, there are still no signs of an agreement being met between Democrats and Republicans in the near future.

President Trump and Republicans demand funding for a wall for the safety of America, while Democrats are putting their foot down to make sure the President doesn’t fulfill his biggest campaign promise.

Although it can be argued that stubbornness by both sides is to blame for the ongoing shutdown, Newt Gingrich thinks Democrats are suffering politically with every day that passes.

Gingrich appeared on Fox for an interview and gave his take on what exactly is playing out and what to expect moving forward.

On the current standoff that is happening in Washington, Newt says Democrats are only hurting themselves. He said, “Every day that goes by, it’s obvious that Democrats don’t value the safety of Americans nearly as much as they value the convenience of people trying to get her illegally.” Video Below

Gingrich then focused his attention, specifically, on the attitude of Nancy Pelosi, who he slammed for having the attitude that “if you give me everything I want, then I still won’t give you the wall.”

Newt thinks Democrats unwillingness to compromise is “a really bad way to start with a new Congress.”

On the flip side, however, Gingrich feels that what is going on right now is also critical to President Trump. He said, “In many ways this is a key moment for the President in defining what’s at stake for the country and in shaping the next two years.” Video Below

Newt Gingrich Hops In To The Shutdown Debate (VIDEO)