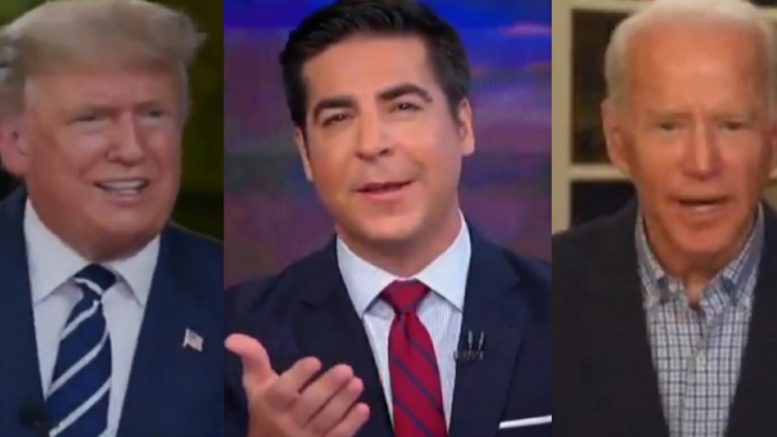 Fox News host Jesse Watters gave a detailed assessment over the current status of the 2020 election, and explained why he feels like the momentum is definitely moving in President Trump’s favor.

He then laid out how Joe Biden’s campaign just got rocked by a “double whammy” as a result of the email scandal involving the former Vice President’s son Hunter Biden.

Watters began by comparing the dynamics of the 2020 election to that of the 2016 election, when Hillary’s campaign was plagued by a “series of events” and scandals in the final weeks heading up to the election.

“Trump outworked Hillary til the very end doing rally after rally, while Clinton coasted. He capitalized on these events, seized the moment and he won. And four years later, here we are again. The same dynamic is happening,” Watters declared. “The confluence of events is redirecting the campaign in Trump’s favor and he’s taking advantage.”

He then laid out four examples of how the “tide is turning” in President Trump’s favor, which are as follows:

1.) President Trump recovered from the coronavirus and barreled back on the campaign trail, where he is once again holding high-energy rallies every day.

2.) Vice President Pence crushed Senator Kamala Harris in the VP debate. His performance steadied the ship while Trump was out of action. Trump was then able to recover, and came back strong in NBC’s townhall after the second debate was cancelled and debate moderator, Steve Scully, was caught lying about his Twitter account getting hacked, proving that the “fix was in” against the President.

3.) Amy Coney Barrett sailed through the hearings, and delivered a “flawless performance”. She was so bright and smooth, that now Americans want her confirmed by a wide margin. This reminds voters of the stakes in the election and the importance of the court. Biden, on the other hand, “shot himself in the foot” by refusing to answer any questions related to packing the Supreme Court.

4.) The Biden family got rocked by a major scandal and the big tech companies supressed it.

It was this forth notion that Watters said was a “double whammy” for Joe Biden and forces of the left that are trying to protect his campaign.

“Emails show Hunter Biden was selling access to his dad and Biden was pushing policies for family profit,” Watters said.

“Joe Biden lied about not knowing what his son was up to,” he continued. “His son introduced him to a Burisma executive. Burisma lobbied the Obama/Biden White House to fire the prosecutor investigating him for corruption, and Biden fired the prosecutor.”

“Emails also show Chinese money may have been going to Joe Biden, himself. But Facebook and Twitter censored the story. Twitter actually locked the accounts of the White House press secretary, the Trump campaign and the New York Post — the paper founded by Alexander Hamilton,” Jesse pointed out. “Corrupt, partisan monopolies donating millions to the Democratic nominee are now shutting down criticism of him and it’s backfiring and making the story bigger.” Video Below