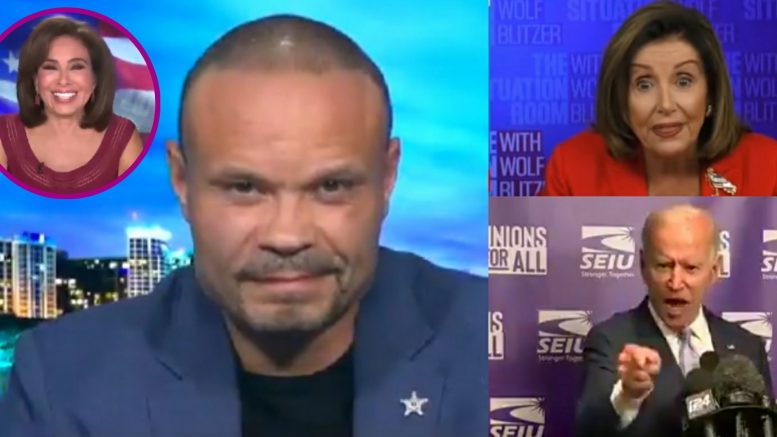 While appearing on Justice With Judge Jeanine on Saturday, Dan Bongino weighed in on why Democrats seem “so angry” in the rare event that they get served a challenging question from a member of the press.

Judge Jeanine asked “Why are Democrats so angry?” in reference to a CNN interview, where House Speaker Nancy Pelosi got into multiple heated exhanges with Wolf Blitzer after he pressed her over key issues.

“The reason you Democrats so angry all the time is they are never confronted on their stupudity ever,” Bongino said.

“Their whole lives are a lie. Nothing Democrats ever tell you is true,” he continued. “But the culture, Hollywood, acadèmia — they’re never confronted because everybody is a leftist.”

“So when you get an honest journalist who is like, ‘Hey Joe, I saw these emails about your son basically selling us out to nuclear-powered enemies like Russia and China. It’s kind of a big deal. You wanna comment?’ And Joe’s like, ‘Oh, screw you dude. Don’t ask me that question.’ Of course he is [angry] because he’s never been confronted.”

“Now switch that on for Donald Trump, who’s asked hostile questions every day, and he just swats everyone away because he’s just used to it at this point. That’s why Democrats are always so angry. They’re just not used to what you and I have to deal with every single day,” Bongino concluded. Video Below

There were sharply different tones in Thursday night’s competing town halls as Joe Biden was lobbed softball questions while President Trump was getting grilled. @dbongino is on to analyze and compare the town halls. pic.twitter.com/8PcLf5yJGA

In ending, here is two incidents related to Bongino’s remarks, where Joe Biden gets flustered when asked tough questions:

I asked Joe Biden: What is your response to the NYPost story about your son, sir?

He called it a “smear campaign” and then went after me. “I know you’d ask it. I have no response, it’s another smear campaign, right up your alley, those are the questions you always ask.” pic.twitter.com/Eo6VD4TqxD

"How was your role as Vice President in charge of policy in Ukraine and your son's job in Ukraine, how is that not a conflict of interest?"

BIDEN: "I'm not going to respond to that!"pic.twitter.com/lat6nCvhki

Pelosi Says She Wants ‘Credit’ For Allowing Iowa GOP Rep. Miller-Meeks To Be Seated In Congress