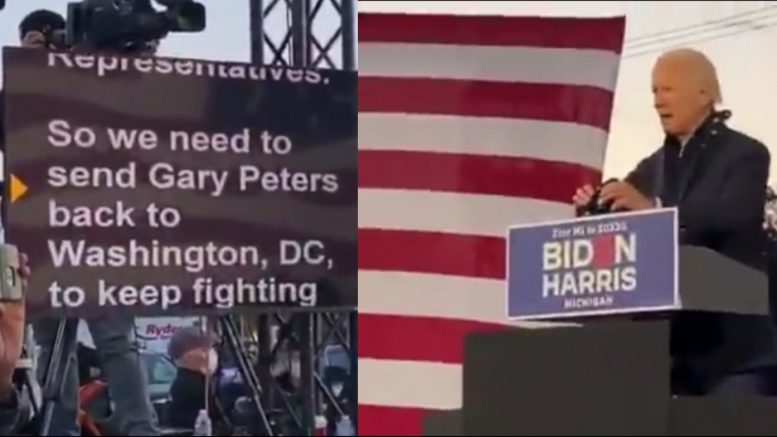 Joe Biden’s use of a huge teleprompter went viral on social media on Friday soon after he campaigned at a “voter mobilization event” in Detroit, Michigan.

Freelance journalist Brendan Gutenschager (aka BGOnTheScene), who was present at the event, posted video footage of the Democratic nominee delivering his speech as it pans over to a screen with giant words on it that was mounted just a few dozen of feet away.

Related Article: Jesse Watters Reveals Proof Of Joe Biden’s Use Of A Teleprompter During At Least One Interview

Former Hollywood actor James Woods was dumbfounded by the size of the teleprompter after seeing the video clip as it circulated across social media.

Here is his reaction:

The size of this thing! https://t.co/rEsPXITB07

The size of Biden’s teleprompter is an easy target for the Trump campaign, which has repeatedly blasted the former Vice President’s excessive use of teleprompters for interviews and basement speeches over the course of the election season.

‘Having The Courage To Do The Right Thing!’: Trump Declares Of PA Court Who Ruled Expansive Mail-In Voting Law Unconstitutional