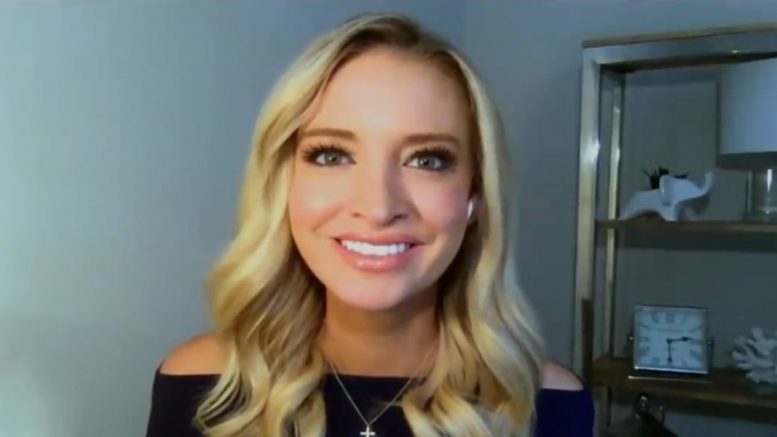 McEnany was locked out Wednesday evening but her account was restored on Thursday.

“They essentially have me at gunpoint and said unless you delete this story, a news story by the New York Post, I cannot regain access to my account,” Kayleigh McEnany told host Sean Hannity on Fox News Wednesday.

“This was a news story with emails, pictures of the emails,” McEnany continued before later adding, “Even the Biden campaign does not dispute the authenticity of the emails.”

“Meanwhile, the Ayatollah of Iran [has tweeted] ‘death to Israel,'” she noted. “This is permitted on Twitter, but an email that is reported by the New York Post, a credible outlet, you are not allowed share that information.”

“This is not the American way,” McEnany argued. “This is not how a freedom-loving democracy operates. We have to hold Twitter accountable, and Facebook too, who is banning the transmission of this story simply because ideologically it hurts the side of the aisle that Silicon Valley prefers. It’s sad, it’s censorship. This is not America. And make no mistake: if they can ban the press secretary of the United States for President Trump, they can ban you as a citizen, and that is pathetic.” Continued Below

McEnany had tweeted on Wednesday, which Twitter flagged: “**NEW** Email from Ukrainian executive to Hunter Biden asks Hunter to ‘use his influence’ on behalf of the firm paying him $50K/mo in email with subject ‘urgent issue’ obtained by @nypost Father @JoeBiden was in charge of Ukraine relations at time.!!”

The New York Post reported in the story that emails show Hunter Biden set up a meeting between his father, then the vice president Joe Biden, and a Ukrainian businessman on the board of Burisma Holdings, which employed Hunter Biden. Joe Biden has claimed he was never involved in his son’s business dealings.

“Dear Hunter, thank you for inviting me to DC and giving an opportunity to meet your father and spent [sic] some time together. It’s realty [sic] an honor and pleasure,” reads a 2015 email allegedly written by the businessman, Vadym Pozharskyi. Continued Below

The White House press secretary on Thursday, emerged back on Twitter with a vengeance after being locked out of her account. “I’M BACK and I will NOT be silenced! Twitter’s goal was to silence me, but they won’t win! Looking forward to Jack being subpoenaed by @senjudiciary!” she tweeted.

“I appealed Twitter’s decision to lock my account for posting a news report from
@NYPost— one of the largest papers in the nation. Twitter did not respond to my appeal but continued to lock me out until I deleted the news about @JoeBiden,” McEnany reported.

“All Twitter did was succeed in drawing more attention to the Biden corruption – well done! I will now tweet more about Biden than ever before. I’m FIRED UP!” she declared and attached a picture of what Twitter was allowing to trend.

I’M BACK and I will NOT be silenced‼️

Twitter’s goal was to silence me, but they won’t win!

Looking forward to Jack being subpoenaed by @senjudiciary!

All Twitter did was succeed in drawing more attention to the Biden corruption – well done!

I will now tweet more about Biden than ever before. I’m FIRED UP! 🔥

THE MEDIA is against us.

BIG TECH is against us.

THE SWAMP is against us.

THE DEEP STATE is against us.

THE HOLLYWOOD ELITE is against us.

CHINA is against us.

We are back and we are re-posting the video Twitter doesn’t want you to watch.

JOE BIDEN IS A LIAR WHO HAS BEEN RIPPING OFF OUR COUNTRY FOR YEARS!

(Related: Trump Reacts After Steve Scully Gets Suspended For Lying About Twitter Hack)