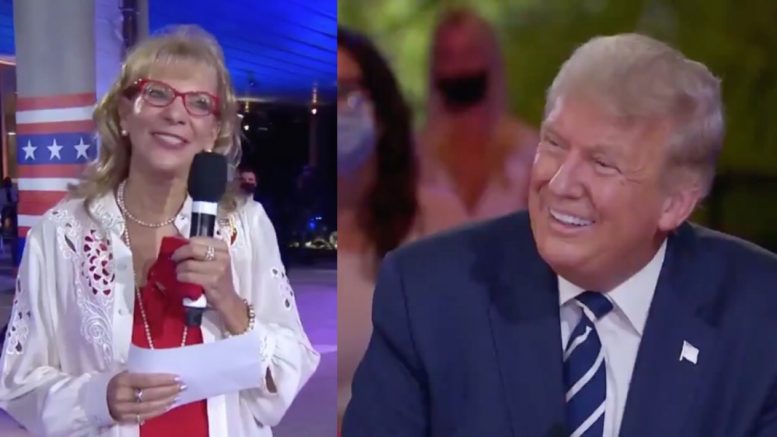 After campaigning in at a rally in North Carolina on Thursday, the Commander in Chief appeared at an NBC News town hall in Miami, Florida, with host Savannah Guthrie. Meanwhile, Democratic presidential nominee appeared at a separate town hall hosted by ABC News’ George Stephanopoulos in Philadelphia.

During the NBC News town hall, however, voters asked questions of the president, and one particular voter, who is a Republican but leaning toward Biden, Paulet Dale, first began by complimenting the President Trump’s “great smile”.

“Good evening, Mr. President. I have to say you have a great smile,” Dale warmly said.

President Trump thanked Paulet Dale and flashed his smile, prompting some members in the audience to applaud.

“You’re so handsome when you smile,” she expressed.

Voter to President Trump at #TrumpTownHall: “You’re so handsome when you smile." pic.twitter.com/KgJThAtAQg

Paulet Dale went on to ask President Trump about DACA. Here is his response:

We leave you with a few reactions to Paulet Dale’s compliment to President Trump:

I love that you had to air this for the entire nation to see! #Trump2020

So, handsome my Pres. is!! Great smile!!

Undecided woman tells President Trump that he has a great smile. Members of audience clap. That’s a win! #TrumpTownHall

Absolutely the best part of the NBC "TOWN HALL" with President .@realDonaldTrump.