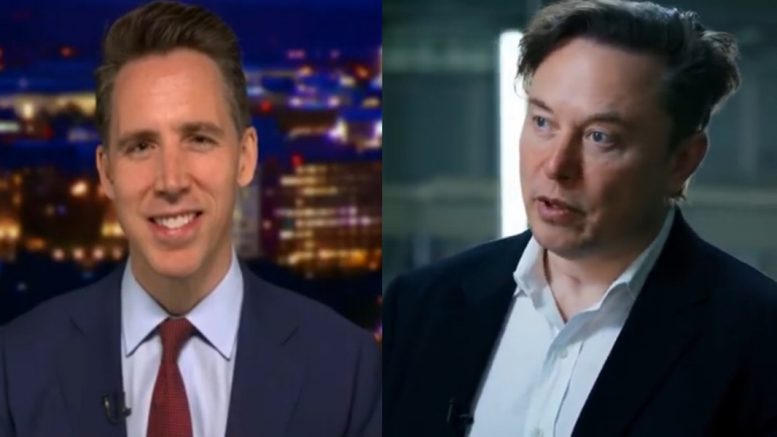 Senator Josh Hawley (R-MO) sent a letter to business magnate Elon Musk one day after Twitter’s Board of Directors officially accepted Musk’s offer of $54.20 per share in cash, valuing the company at around $44 billion. The deal would allow Mr. Musk to take the 16-year-old social media platform private and implement a wide range of changes to the struggling tech firm.

In his letter, the Missouri Senator urged Musk to “open the books”, conduct an “audit” and release the information to the “public”.

“There’s certainly a lot of work to be done. Twitter has largely evaded public accountability over the past several years. Since I’ve been in the Senate, I’ve sent a number of oversight inquiries to the company,” Senator Hawley wrote to Musk. “These letters cover subjects as diverse as content moderation policies, viewpoint discrimination, suppression of content, and Twitter’s own security. Twitter, not surprisingly, has effectively ignored these requests.”

“But perhaps, most importantly, all the way back in 2019 I sent a letter to Twitter urging the company to ‘conduct a third-party audit and release the results to the public, in full'”, the Missouri lawmaker said in his letter.

“Now you have the chance to make the kind of audit a reality. In recent years, Twitter has intervened in American discourse with an increasingly heavy hand, attempting to shape the information environment for overly partisan reasons. Algorithms didn’t make those calls: employees did. And at this point, the American people deserve to know the truth about what went on at Twitter for years behind closed doors,” Senator Hawley insisted.

Mr. Hawley then asked Musk “some particularly salient questions to investigate in the audit”. Continued Below

“A public audit like this will prove essential, as you start to rebuild a culture of free speech and open discourse at Twitter, to determine where exactly things went wrong on the platform and who is principally responsible,” Senator Hawley wrote.

“No doubt the results will be illuminating for all of us,” he added.

Mr. Hawley posted his letter to Elon Musk on Twitter Tuesday, and also said, “Here’s an idea for ⁦@elonmusk⁩. Open the books on who Twitter has shadow banned, who Twitter has suspended, who they’ve throttled, and who was responsible for the egregious censorship of the Hunter Biden laptop reporting. Make it all public”. Continued Below

Here’s an idea for ⁦@elonmusk⁩. Open the books on who Twitter has shadow banned, who Twitter has suspended, who they’ve throttled, and who was responsible for the egregious censorship of the Hunter Biden laptop reporting. Make it all public pic.twitter.com/gbLaaUXuR4