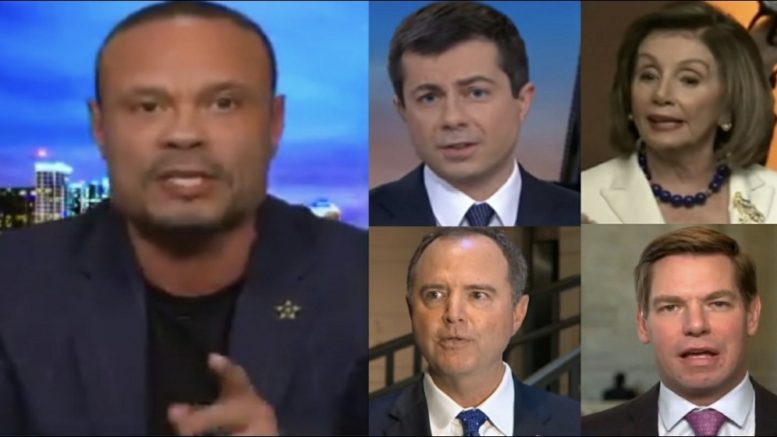 While appearing on Justice With Judge Jeanine, Dan Bongino had some choice words for leftists who’ve been condemning President Trump and defending Iran in wake of the airstrike that killed General Qassem Soleimani.

As an example, Judge Jeanine brought forth a recent statement made by Democrat Presidential candidate Pete Buttigieg after learning Iran was responsible for shooting down a Ukrainian airplane that killed all 176 passengers on board.

“Innocent civilians are now dead because they were caught in the middle of an unneccessary and unwanted military tit for tat,” Buttigieg tweeted. “My thoughts are with the families and loved ones of all 176 souls lost on that flight.”

Referencing Buttigieg’s tweet, Judge Jeanine said, “As opposed to if they’re gonna blame someone, how about thanking the American military for that strike on Soleimani where there were no other civilian casualties?”

Bongino responded by saying Democrat leaders and leftists in the media who have defended Iran since Soleimani’s death have been doing so because there is nothing political to gain by defending President Trump.

“These are morally inept, cosmic-level losers,” Bongino said. “Can we just be candid? I mean, the Democrat party is on the wrong side of history.” Video Below

“I absolutely mean every word of that,” Bongino said as he reiterated “the only people who think that the killing of… one of the world’s most wanted terrorists” are on the wrong side of history.

He then mentioned the story of Congressman Brian Mast (R-FL) who lost his legs from an IED that Soleimani designed Many of Mast’s fellow soldiers actually died from Soleimani’s IEDs because “their lungs were roasted and they suffocated to death and shrapnel pierced their skulls.”

“You’re pissed off we killed Soleimani? You get the double-barrell middle finger from me,” Bongino said. I don’t care. You guys are on the wrong side of America with every single issue.” Video Below

If impeachment wasn’t enough, the left is now in a tizzy over President Trump’s decisiveness on Iran. @dbonginoand @CLewandowski_ joined me lived to discuss talk all about that and more: pic.twitter.com/mYZA4iGmaD

Levin Issues A Call To Action To All ‘Patriotic Americans’ In Wake Of The DNC: “Stand Up For Your Country Cause They’re Trying To Take It From You”